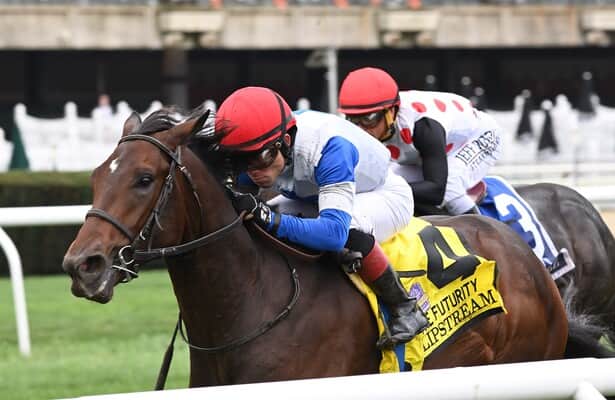 Coming off a maiden-breaking victory last month, Slipstream (2-1) rallied from far back to win Sunday in the Grade 3, $150,000 Futurity Stakes on the inner turf at Belmont Park.

Sired by More Than Ready, trained by Christophe Clément, and ridden by Joel Rosario, Slipstream split horses, passed Run Curtis Run (20-1) in the deep stretch and won by one length.

Asked if Slipstream will be sent to the Breeders’ Cup, Clément said, “If it’s up to me, yes. We have to see how he comes out of it and be sure the owners are on board and that everything goes well.”

Slipstream might have company from the Clément barn in the Juvenile Turf Sprint.

“I’d like to go with Derrynane, who won at Woodbine last month. I still don’t know if they’ll invite her or not. I prefer six (furlongs) going into a race that’s a mile at Del Mar on firm than a mile-and-a-sixteenth and drop back to a mile. I always like when you go to California, the idea of pushing that sprinter speed going six or seven furlongs to a mile.”

Slipstream was bought for $170,000 last September by Jump Sucker Stable, a partnership that was established by New York Racing Association board member Steven Duncker, a retired partner at Goldman Sachs.