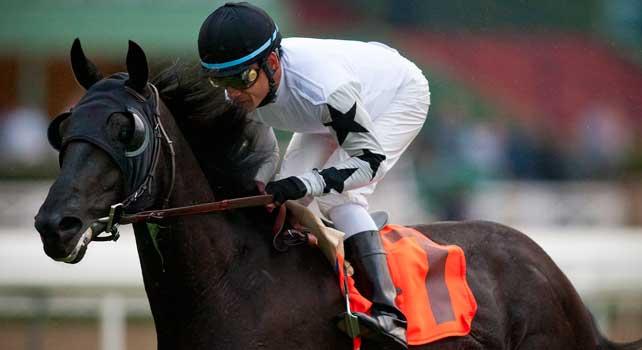 Owned by breeder Phil Cunningham and trained by Simon Callaghan, Slim Shadey will be seeking to rebound from a sixth place finish over a yielding surface in the Grade I Turf Classic May 4 at Churchill Downs.

Second behind three-time winner Acclamation in the 2012 Whittingham, Slim Shadey, a 5-year-old gelded son of Val Royal, has won five of 28. Out of the Chief’s Crown mare Vino Veritas, the English-bred has earned $622,314.

All Squared Away cuts back in distance after finishing second – beaten by a nose by Interaction – in the Grade II San Juan Capistrano Handicap April 21 at Santa Anita.

Trained by Peter Miller for a partnership that includes Brous Stable, Wachtel Stable and Wire to Wire Stables, the 4-year-old Bellamy Road gelding out of the Posse mare Squared has won four of 21 and banked $334,809.

Second behind Dhaamer in the Round Table Handicap May 12 in his first race over the turf at Betfair Hollywood Park, Lime Rickey will seek his first win of the year in the Whittingham.

Owned by a partnership that includes Beauchamp, Smith and Whitney LLC and trainer Bill Spawr, the 7-year-old Lemon Drop Kid gelding out of the Deputy Minister mare Kootenai has won seven of 40 and earned $457,067.

Undefeated in three appearances over the Betfair Hollywood Park grass, Lucky Primo returns from a layoff for trainer Joshua Litt.

The 7-year-old gelded son of Atticus and the Personal Flag mare Live Free Or Die hasn’t been seen since winning the California Cup Classic on the dirt at Santa Anita last Oct. 13.

Owned by J B K Stable and Jason Litt, Lucky Primo has won six of 16 and his bankroll is $437,616. He won an allowance by 2 ¼ lengths as the 5-2 favorite in his most recent start at Betfair Hollywood Park last July 14.

Niagara Falls will be making his fourth start of the Spring/Summer meet for Mrs. Paul Shanahan and trainer Patrick Biancone. The 4-year-old son of Giant’s Causeway and the Kingmambo mare Istikbal has won twice at the current season, including an optional claimer by 4 ¼ lengths going 12 furlongs May 24. A winner twice in seven starts, Niagara Falls has banked $85,392.

Third in the San Juan Capistrano, Smart Ellis will be aiming to improve upon a 12th place finish in the Grade I Hollywood Derby last Nov. 25 in his first race over the local turf.

Owned by breeders Alain and Gerard Wertheimer and trained by Hall of Famer Richard Mandella, Smart Ellis, a 4-year-old Smarty Jones colt out of the El Gran Senor mare Corrazona, has won three of 12 and earned $169,840. Mandella won this race in 1996 with Sandpit when it was called the Hollywood Turf Handicap.

No better than fifth in five previous starts in graded stakes, Tale of a Champion steps up after winning the March Madness Handicap March 30 at Santa Anita.

Owned by Kretz Racing LLC and trained by Kristin Mulhall, the 5-year-old Tale of the Cat horse out of the Seattle Slew mare If Angels Sang has won five of 13 and earned $149,708.