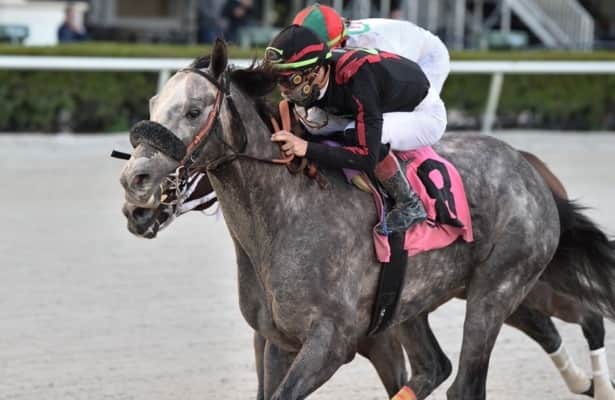 Sleepy Eyes Todd is back in Grand Island, Neb. for the 46th running of the $75,000 Gus Fonner Stakes Saturday at Fonner Park.

Sleepy Eyes Todd, who drew the ninth post position Thursday morning, is one of a full field of 10 horses entered in the 1 1/16th mile race.

The defending champion cruised to a 6 1/2 length win in last year’s Gus Fonner. That was just the beginning of a big run for Sleepy Eyes Todd. He went on from there to win stake races at Charles Town, Keeneland and Gulfstream before taking his act overseas.

Sleepy Eyes Todd, a 5-year-old Kentucky-bred son of Paddy O’Prado and Pledge Mom, finished fifth in the $20 million Saudi Cup Feb. 20 at King Abdulaziz Racecourse and then was 10th in the $12 million Dubai World Cup on March 27.

“It’s always special when the defending champion returns, but it’s next to unthinkable that the same horse, Sleepy Eyes Todd, returns having run against arguably some of the best horses in the world in his last three races,” Fonner Park CEO Chris Kotulak said.

Since winning the Bosselman, Sleepy Eyes Todd has gone on to earn over $1.5 million. He now has eight wins in 18 career starts and has earned a total of $1,889,825 for trainer Miguel Silva and owner Thumbs Up Racing.

Kotulak said Having Sleepy Eyes Todd back at Fonner will draw even more attention to Fonner Park.

“This is quite a treat for our fans to come see, but our off-track mutuel handle has quadrupled since all of the world watched Fonner Park last year,” Kotulak said. “But you can bet that thousands of eyes across the nation will be watching and wagering on Sleepy Eyes Todd again this Saturday.”

Sleepy Eyes Todd, who will be ridden by six-time Fonner Park champion jockey Jake Olesiak, has been installed as a 1-1 morning-line favorite, but he will be challenged by nine others who also have their eyes on winning the Gus Fonner.

Trainer Marissa Black has her duo of Blue Harbor and Mr. Tickle entered for the second straight year. Blue Harbor, second in the Bosselman last year is 12-1 and Mr. Tickle, third a year ago, is 25-1. Most Amusing, trained by Nebraska Hall of Fame trainer David C. Anderson, is also 25-1.

The giant Saturday also features a mandatory payout in the Dinsdale Auto Late Pick 5 Jackpot wager. There is a carryover into the Friday, April 23rd racing of over $110,000. First post Saturday is 1:30 p.m. CT. The Late Pick 5 Jackpot involves the final five races on the card.
Sleepy Eyes Todd