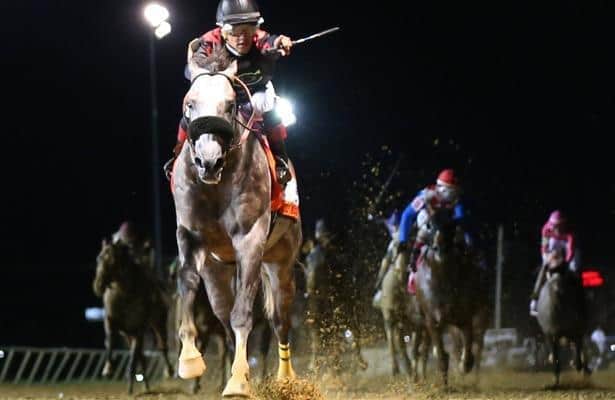 Stakes winner Sleepy Eyes Todd made the grade Friday night, leading at every call for a dominant win in the Grade 2, $600,000 Charles Town Classic.

Sleepy Eyes Todd is a 4-year-old son of Paddy O’Prado. He entered the Charles Town Classic – a 1 1/8-mile, three-turn dirt trip – off a second-place effort June 28 in the Lone Star Mile Stakes.

Under jockey Carlos Delgado, Sleepy Eyes Todd took the lead into the opening turn and angled inside to rate the pace for the 10-horse field. He set fractions of :24.64, :49.14 and 1:13.59 while followed by Mr. Money and Multiplier.

Sleepy Eyes Todd increased his lead to four lengths at the top of the stretch and continued to draw away under steady handling. He finished a commanding 7½ lengths in front, hitting the wire in 1:50.82.

Sent off as the 3-1 co-favorite, Sleepy Eyes Todd returned $7.60. He gave both Delgado and trainer Miguel Angel Silva their first graded stakes triumphs with Friday’s win.

“This is the biggest win of my career and hopefully the first of many,” Silva said. “This is the nicest horse I’ve ever had and there are no words. We always were really high on him. We’ve run in some big races and we’re so proud of him.”

2019 UAE Derby (G2) winner Plus Que Parfait and defending Charles Town Classic hero Runnin’toluvya finished second and third Friday, respectively. Both those runners were sent off at 26-1 odds, and they juiced up a trifecta that returned $1,259.40 on a $1 bet.

Wicked Whisper and Princess Cadey finished second and third, respectively. Grade 2 winner Tonalist’s Shape had to check at the sixteenth pole and settled for a fifth-place run as the 3-2 favorite.