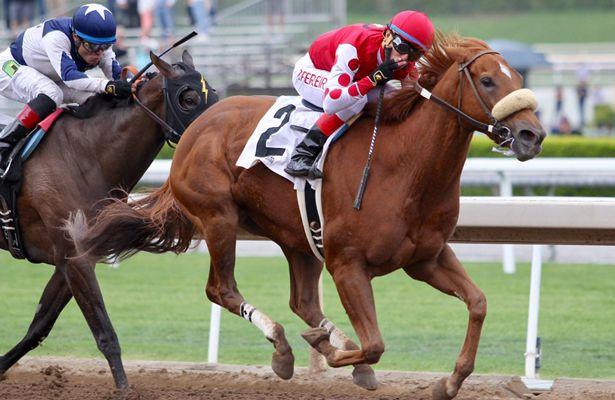 Scheduled at 6 ½ furlongs, the Grade 2 race for fillies & mares 3-year-olds & up will go as the eighth of nine races. Scheduled post time for the main event is 7:28 p.m. ET.

The victory was the fourth of five during a seven-race campaign for the 5-year-old First Dude mare, who has won six of 12 since being claimed for $40,000 by her current connections Aug. 27, 2016.

Out of the Johannesburg mare Exonerated, Skye Diamonds will be seeking her first win of 2018. She was third in a pair of graded stakes at Santa Anita to begin her year, then finished sixth of seven in the Grade I Humana Distaff May 5 at Churchill Downs.

The win was the fourth in 10 starts for the 4-year-old Blame filly out of the Formal Gold mare Relaxing Green. She has earned $233,435.

Baffert will be seeking his second win in the Great Lady M., having scored with Fantastic Style in 2015.

Phantom Proton will make her graded stakes debut in her return to Los Alamitos for Stepaside Farm LLC and trainer Neil Drysdale.

A daughter of Ghostzapper and the Smoke Glacken mare Quantum Miss, the 4-year-old graduated in her only previous local start, defeating eight rivals Sept. 7, 2017.

A Pennsylvania-bred, Phantom Proton has won three of 12 with earnings of $136,355. She was successful in her last start, winning an optional claimer by a neck May 26.

Turkish Tabby ships south for Hall of Fame trainer Jerry Hollendorfer and KMN Racing after finishing third as the 4-5 favorite in a $36,222 allowance June 10 at Golden Gate Fields.

A daughter of Eskendereya and the Mr. Greeley mare Miss Stonestreet, the 5-year-old has won three of 13 and banked $93,425. She is winless in two starts on dirt.

Best of Me will take on older for the first time after scoring a 15-1 upset against fellow 3-year-olds June 7.

Trained by Peter Miller for Todd and Shawn Hansen, the Super Saver filly out of the First Samurai mare Lemon Gin has won half of her four races and earned $72,705.