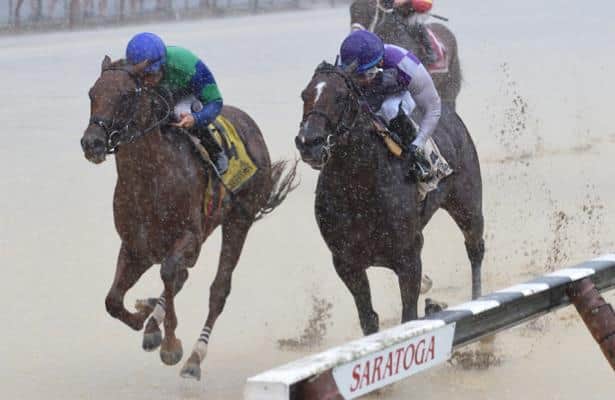 E.V. Racing Stable's Sky of Hook handled the sloppy and sealed track during a driving rainstorm, running down Listentoyourheart in the final stride to win the $100,000 Rick Violette by a nose in the opener of Wednesday's card at Saratoga Race Course.

Listentoyourheart, the 2-1 second choice, led the five-horse field of juvenile New York-breds on the off track, going the opening quarter-mile in 22.75 seconds and the half in 46.50 with Mission Wrapitup tracking outside.

Listentoyourheart, under jockey Manny Franco, maintained the lead out of the turn, but Sky of Hook, under encouragement from Luis Saez, made a strong stretch-drive move and got his nose on the wire in a final time of 1:13.17 for the six-furlong sprint.

Sky of Hook, who won his debut by a head on May 10 at Belmont, improved to 2-for-2 in winning his stakes debut. Trainer Rudy Rodriguez said Sky of Hook remains a possibility to switch to turf.

"We tried to get him ready and get him along without hurrying him. It worked out good," Rodriguez said. "I thought he was in trouble because he was lagging a little bit. But to run like this in the slop, everything worked out perfect.

"He can handle the sloppy track, but he's been working pretty good on the grass, too. We'll see what we have to do there," he added.

A Tapiture colt, Sky of Hook became the first stakes winner for his sire, returning $20.60 on a $2 win wager. He more than doubled his career earnings to $84,100.

"The track conditions weren't ideal, but he broke sharply and handled it well," Saez said. "When we came towards the stretch, I really knew he was game. He was trying his best. I knew I had enough to get there and thankfully we did before the wire."

Listentoyourheart, trained by Christophe Clement, was a first-out winner on June 23 at Belmont. Though he relinquished the lead in the final furlong, he finished clear of the Theitalianamerican by 5 ¼ lengths for second.

"I had a good trip. I waited as long as I could because my horse just ran five furlongs for the first time, and I was trying to save some horse for the end," Franco said. "The winner was very good."

Rounding out the field was Mission Wrapitup and Torres Del Paine.

Previously run five times as the Rockville Centre and contested at Belmont Park, the race was renamed for the late trainer Rick Violette, Jr. and moved to the Saratoga meet. Violette was a long-time NYRA horseman and former president of the New York Thoroughbred Horsemen's Association and a lifelong supporter of all aspects of the industry, serving as the founding member of the board of the Thoroughbred Aftercare Alliance and co-created the TAKE THE LEAD Aftercare Alliance.

As a trainer, he won 870 races with 5,499 starters, including campaigning Diversify to victory in the 2018 Grade 2 Suburban at Belmont and the Grade 1 Whitney at the Spa last year before passing away in October.

"It's great to win a race like this that's named after Rick for all the good things he's done for the sport. We really miss him," Rodriguez said.