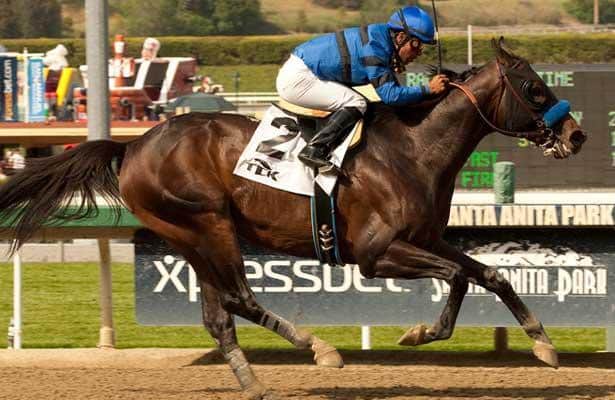 Sky Kingdom proved history can repeat itself as he was an impressive 5 ¾ length winner of Saturday’s Grade III, $100,000 Tokyo City Cup under Martin Garcia. A winner of the mile and a half marathon in 2013, the Bob Baffert trainee had been idle since well beaten in the Las Vegas Marathon (1 ¾ miles) on Oct. 31 and got the distance in 2:28.90 as the second choice in a field of six older horses.

Second early to longshot Arlington House, Sky Kingdom, a 6-year-old horse by Empire Maker, relaxed well under Garcia and was a length off the pacesetter under the wire for the first time. Garcia got on terms with Arlington House at the five furlong pole and took the lead going to the three furlong mark.

“They gave him a break but he runs well after some time off,” said Garcia. “He loves this track and he loves this distance. The farther the better for him. He has a long stride and these longer races just make him happy.”

Last under the wire the first time, Bailoutbobby moved inside favored Bronzo into the far turn and outran him for the place by 4 ½ lengths. Ridden by Elvis Trujillo, Bailoutbobby was off at 12-1 and paid $7.40 and $2.80.

Trained by Neil Drysdale and ridden by Gary Stevens, Chilean-bred Bronzo came off a fifth place run in the Grade I Santa Anita Handicap and had been facing the likes of Shared Belief, California Chrome and Hoppertunity in his three stateside engagements dating back to Jan. 10.

“They went really slow early,” said Stevens. “Maybe I should have let him dance away from there for the first quarter mile. He went to sleep on me and I couldn’t wake him up.”