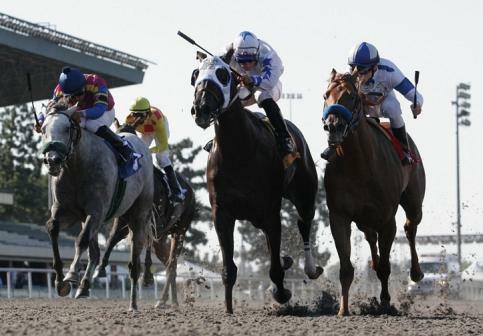 In what was essentially a match race from start to finish, Skipshot wore down Sidney’s Candy in the final strides to win the $196,000 Swaps Stakes Saturday at Hollywood Park.

The 4-1 second choice in the field of four, Skipshot tracked the prohibitive 1-5 favorite, dropped back a bit early in the stretch, but kept to his task and was able to prevail by a head in the Grade II under new rider Joel Rosario.

The win in the Swaps was the first in a graded race for the 3-year-old Skip Away ridgling and the Sunny’s Halo mare Heavenly Note. His best previous finish in three earlier starts in graded events was a second behind Golden Itiz in the Affirmed Handicap on June 19.

“The assistant trainer (Dan Ward) told me to keep the pressure on Sidney’s Candy,’’ said Rosario, who holds a four winner lead over Rafael Bejarano (78-74) in the jockey’s race entering the final day of the meet Sunday.

“If we let him get loose, maybe we’d never catch him. I continued to ride hard all the way. If he beats me, fine. I thought we’d at least get second, but we beat him, so that’s good.’’

Making his first start since he finished 17th in the Kentucky Derby on May 1 at Churchill Downs, Sidney’s Candy looked to be on his way to his fourth stakes victory when he kicked away from Skipshot with about three-sixteenths of a mile to run.

“He was training so well up to this race,’’ said Joe Talamo, Sidney’s Candy’s regular rider. “I think that last little part just got him. He was coming off a decent layoff, so I could see him maybe needing the race.

“You never know until you get them out in the afternoon. He’s still a great horse and he’s going to bounce back.’’

Although Summer Movie, the Swaps longshot at 14-1, was only a half-length behind Sidney’s Candy at the wire, he never threatened for the win. Alphie’s Bet completed the order of finish. He was 2 ½ lengths behind Summer Movie.

In the day’s other Grade II, Sweet August Moon took advantage of an opening along the rail approaching the stretch and went to a 13-1 upset over five opponents in the $150,000 A Gleam Handicap.

The second longest shot in the cast, the 5-year-old daughter of Malibu Moon out of the Royal Academy mare Silent Academy earned the second graded score of her career. Her previous win had come in the Las Flores Handicap, a Grade III, on April 5, 2009 at Santa Anita.

This was the first time Victor Espinoza was aboard Sweet August Moon and the win continued a run of A Gleam success for the jockey. Espinoza has won the race four times in the last eight years.

“We just got her to calm down a little bit,’’ said Koriner, explaining Sweet August Moon’s improved performance. “We ran her in a tongue tie today and we’d never run her in one before because she’s so ornery. There were a few little things that made the difference.’’

Free Flying Soul, who was seeking her second stakes win of the meet after a victory in the Desert Stormer Handicap on June 12, finished 1 ¼ lengths in front of Will O Way.

There is also a carryover in the Super High Five of $48,518. The $1 minimum wager will be offered in the 10th and final race. There is a mandatory payout since it is closing day and the same applies to the Pick Six.