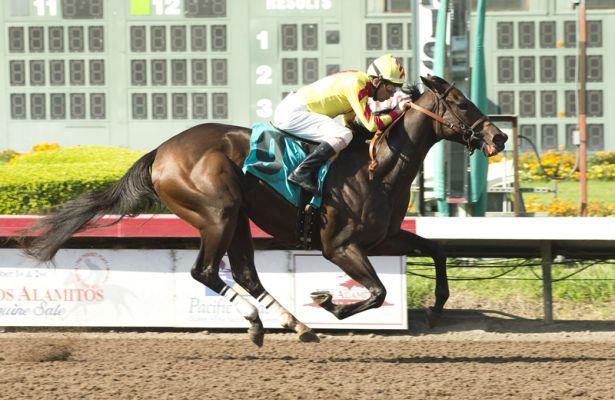 Trainer Brian Koriner said Friday morning that Steph Being Steph, who drew the rail post, would be scratched.

Check the Beyer speed figure numbers and Ms Bad Behavior, a Canadian-bred daughter of Blame, has the highest in a group with limited racing experience – a 79 achieved in a third-start, maiden-breaking win at Santa Anita on October 15. The last-out score was by 3 ¼ lengths going 6 ½ furlongs.

The math, and the speed figure numbers, will be validated or invalidated when the Desi Arnaz, formerly the Moccasin Stakes, is run for the third time at Del Mar as the fifth on a nine-race card that starts at 12:30 p.m.

“She’s had some time between races, she’s trained very well and the last couple of works have been very good, so this seemed like a logical spot for her,” Baltas said of Ms Bad Behavior. The filly, owned by Sayjay Racing LLC and partners, made the first two starts of her career at the summer meeting here, finishing third at five furlongs on August 12 and second, beaten 2 ½-lengths by Alluring Star on September 3.

Secret Spice, a Kentucky-bred daughter of Discreet Cat owned by Little Red Feather Racing, also debuted here in the summer. A fourth in that 5 ½-furlong race was followed by a win at 5 ½-furlongs at Santa Anita before being stretched out to six furlongs in the $70,000-added Anoakia Stakes at Santa Anita on October 22.

“She missed the break last time,” Baltas said. “That race might have stacked up a little tougher than this one so we’ll see what happens.”

The extra distance of the Arnaz shouldn’t affect either of his horses, Baltas said.

“(Ms Bad Behavior) just won at 6 ½ (furlongs) going away, so it shouldn’t be a problem,” Baltas said. “If they were going around two turns, it might be a question, but not around one.”