'Sitting on a huge 2020,' Arklow begins in Pegasus World Cup 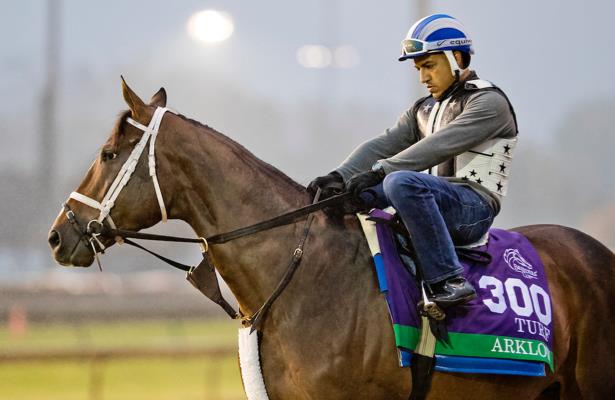 Photo: Eclipse Sportswire
Millionaire Arklow, winner of Belmont Park's Joe Hirsch Turf Classic (G1), is on target to make his next two starts in the Grade 1, $1 million Pegasus World Cup Turf at Gulfstream Park and the Group 1, $6 million Dubai Sheema Classic, Donegal Racing founder Jerry Crawford announced Wednesday.
Luis Saez will ride the 6-year-old Arklow in the Pegasus Turf, Crawford said. Saez won Gulfstream Park’s 2017 and 2018 Championship Meet riding titles and lost the 2019 crown by a single win behind reigning Eclipse Award-winning jockey Irad Ortiz.
The 1 3/16-mile Pegasus World Cup Turf is part of a blockbuster card Jan. 25 in south Florida, while the 1 1/2-mile Dubai Sheema Classic on grass is part of the March 28 Dubai World Cup card that ranks among the world’s premier race days.
Trained by Brad Cox and stabled for the winter at New Orleans' Fair Grounds, Arklow is one of eight Grade 1 winners who received invitations to the Pegasus World Cup Turf.
“Arklow is a world-class horse, and his dance card in 2020 will reflect that,” Crawford said. “He’s always in the hunt and is a major threat to win every race he is in. As he proved in the Joe Hirsch, when things break his way, watch out. Even in defeat, he never loses by much and always tries.

“Even in last fall’s Breeders’ Cup Turf, he might have finished eighth but lost by only a total of 2 3/4 lengths behind Bricks and Mortar after racing wide and having to cover more ground than any horse in the field. We don’t have to contend with Bricks and Mortar this year, and I think Arklow is sitting on a huge 2020.

"We’re excited about having Luis, who might be the most underrated superstar jockey today.”

According to Trakus, in the Breeders' Cup Turf Arklow ran 70 feet farther than leading Horse of the Year contender Bricks and Mortar, 104 feet farther than runner-up United and 114 feet more than third-place Anthony Van Dyck. Arklow also had the fastest Ragozin and Thoro-Graph handicapping numbers of any horse in the Breeders’ Cup Turf owing to the extra distance he traveled.
With Donegal concentrating on stamina pedigrees geared for America’s Triple Crown, Arklow ran five times with moderate success but no wins on dirt before being switched to the turf. He promptly captured a Keeneland maiden race and won Churchill Downs’ American Turf (G2) in his second start on grass, a surface over which he has won six of 19 races, with five seconds and a third to account for most of his career earnings of $1,816,382.
Arklow, a son of the late Claiborne Farm stallion Arch and a $160,000 yearling purchase by Donegal, achieved graded stakes victories at ages 3, 4 and 5, including the Calumet Farm Kentucky Turf Cup (G3) in 2018, then worth $750,000. Arklow was second in the $1 million running of the Kentucky Turf Cup in 2019, avenging that defeat to Zulu Alpha in the Joe Hirsch at Belmont Park.
Even faced with a couple of fluky setbacks in 2019, Arklow had a strong season, earning his first Grade 1 victory and accumulating $743,000 in earnings. In his 5-year-old debut at Keeneland in April, Arklow unseated his rider shortly after the start of the race. Off that regrettable seasonal launch, he then reeled off five straight top-three finishes against top-class company prior to his long journey in the Breeders' Cup Turf. In 2018, Arklow finished fourth in the Turf.
“We’re excited about the opportunity to run in the Pegasus Turf,” said Cox, who is a finalist for the Eclipse Award as North America’s outstanding trainer in 2019. “When Arklow is doing well, he’ll let you know. And right now he is doing really well. He’s always been a horse that we thought would get better with age. I do think he’s set up for a big year.”
In addition to managing partner and majority owner Donegal Racing, Arklow campaigns for Joseph Bulger and Peter Coneway. Donegal’s partners in Arklow include Nick Nurse, coach of the reigning NBA champion Toronto Raptors.
Founded in 2008, Donegal Racing quickly became a regular at the Breeders' Cup since making its first appearance in 2010 with a fifth place in the Classic by Paddy O'Prado, a Grade 1 winner on turf who finished third in the Kentucky Derby. Donegal has had 12 Breeders' Cup starters while being represented in nine of the past 10 runnings of the world's championship races. Keen Ice, who in taking Saratoga’s Travers Stakes became the only horse to defeat Triple Crown winner American Pharoah in 2015, was third in the 2016 Classic after taking fourth in 2015.
Donegal also has won Grade 1 races with Dullahan (who was third in the 2012 Kentucky Derby), Finnegans Wake and Carrick. Unlike some partnerships, where horses are syndicated individually, Donegal partners buy into an entire crop of horses purchased each year so that everyone shares in the success.

The stable usually gives its horses Irish names, with Arklow being a town in County Wicklow on the east coast of Ireland south of Dublin. It was founded by the Vikings in the ninth century.