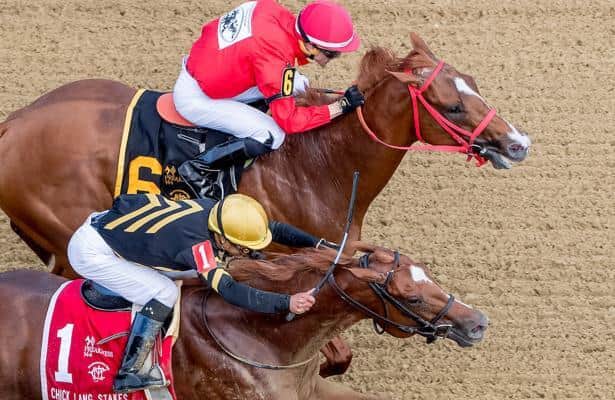 Trainer Jack Sisterson is set for a big day at Saratoga on Saturday with Lexitonian set to run in the Grade 1 Vanderbilt Handicap and Channel Cat ready to go in the Grade 2 Bowling Green.

Lexitonian comes in to the race after a sixth-place finish in his most recent trip in the Met Mile (G1) at Belmont on June 5. Sisterson said the race was too long for the 5-year-old Speightstown horse, who has made his name as a sprinter.

“He’s an out-and-out sprinter, not a miler,” Sisterson said. “That sort of reflected in his performance that weekend, so we’re cutting him back in distance. Six or seven furlongs is his ideal trip.”

Before the Met Mile, Lexitonian came in second to Flagstaff in the Churchill Downs (G1), beating fellow Vanderbilt probable Whitmore in the process. Sisterson said he is hoping for one of the horse’s better trips in the Vanderbilt.

“If Lexitonian shows up that we know can show up, he can compete with any sprinter in the country I think,” Sisterson said. “But then, if that Lexitonian doesn’t show up, he throws in a clunker from time to time. He’s training forward; we think the good Lexitonian will show up.”

Sisterson said he expects Lexitonian to be forwardly placed in the race under jockey Jose Lezcano. Other top probables for the Vanderbilt include Mischievous Alex, who finished third in the Met Mile; Firenze Fire, who enters off a runner-up finish in the John A. Nerud (G2); and Miles Ahead, who won the Smile Sprint Handicap (G3) last time out.

“He came off the pace in the Bing Crosby, but I feel like his better performance is when he’s engaged early,” Sisterson said. “That’s what the tactics will be Saturday.”

If the colt runs well in the Vanderbilt, Sisterson said he would consider the Forego (G1) on Aug. 28 at Saratoga for his next start.

Sisterson’s other stakes probable for Saturday at the Spa is Channel Cat, who won the Bowling Green in 2019 for his previous trainer Todd Pletcher. Sisterson said the 6-year-old has settled in well at the Spa.

“This is the first time I’ve had him up here,” Sisterson said. “His nature, his demeanor around the barn, his characteristics, what he’s shown is that he’s settling in in great shape up here at Saratoga and seems to be doing very well.”

The horse won two trips ago in the Man O’ War (G1) at Belmont on June 5, three weeks after finishing second in the Elkhorn (G2) at Keeneland. After the win Sisterson tried him in the Manhattan, where he crossed the wire seventh.

“He ran a good second in the Elkhorn, and I was originally going to give him some time off after the Elkhorn to run in the Manhattan,

Sisterston said. “He came out of the Elkhorn in such great shape, we ran him back in three weeks at the Man O’ War simply because Channel Cat was telling us he wanted to run back quick. He ran a great race there and probably should have missed the Manhattan.”

Channel Cat will be ridden by John Velazquez in the Bowling Green. Sisterson said he also would expect him to be toward the lead.

“Channel Cat seems to do his best running on the lead, so again we’ll sort of bounce out, and I’m sure John will have him forwardly placed,” Sisterson said. “I think Channel Maker is going to be running as well, so it’ll be interesting whether the speed stacks up in the race, but I assume Channel Cat will be on the lead.”