Sise expects Prospect Park to stalk the pace in Californian 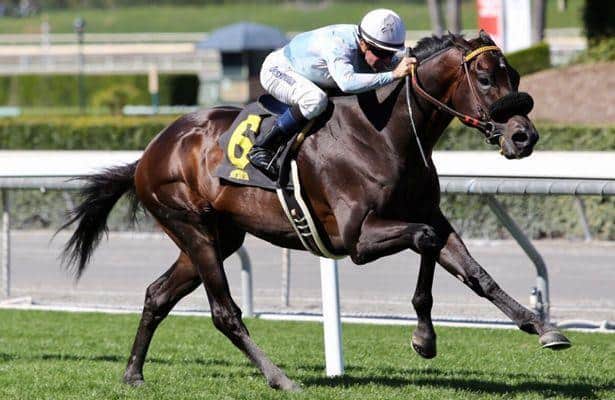 Photo: Zoe Metz Photography
With speed to his inside from Bob Baffert trainees Collected and Cupid, Cliff Sise Jr. sees Prospect Park in a good tracking position for Saturday’s Grade II, $200,000 Californian Stakes for three-year-olds and up at 1 1/8 miles.
“We’ll probably be sitting third or fourth,” the trainer said. “The horse is doing great. He’s as fit as he’s ever been right now. He’s coming into this race really well.”
Prospect Park, a five-year-old full son of Tapit owned and bred by Pam and Martin Wygod, is coming off a front-running victory March 9 by 3 ¼ lengths at 1 1/8 miles on turf. He will be seeking his first stakes win on dirt in the Californian.
He missed by a nose in the Grade II Los Alamitos Derby in July of 2015 and was second in the Grade II San Felipe Stakes at Santa Anita in March of that year. Overall, he has a 4-7-2 record from 17 starts with earnings of $515,770.
The Californian, race eight of 10 with a 1 p.m. first post time: Collected, Martin Garcia, 8-5; Cupid, Rafael Bejarano, 3-1; Prospect Park, Flavien Prat, 7-2; Prime Attraction, Santiago Gonzalez, 10-1; Texas Ryano, Mike Smith, 15-1; and Follow Me Crev, Kent Desormeaux, 5-2.
NAKATANI SEEKS GOOD SPOT IN SAN JUAN
Corey Nakatani has a justifiable reputation as a top turf rider, but when he pilots Inordinate in Saturday’s marathon San Juan Capistrano Stakes at about a mile and three-quarters on the grass, he’ll adhere to a preordained racing axiom in his bid for victory.
“Usually it’s the pace that dictates strategy,” Nakatani said. “Hopefully, we’ll be in a spot where we’re traveling well and it’s good enough to get the job done.”
Inordinate, a five-year-old son of Harlan’s Holiday trained by Richard Baltas for Paymaster Racing, LLC, was seventh in the Grade II San Luis Rey Stakes at a mile and a half on turf last out. The bay Kentucky-bred seeks his first win in the U.S. in his seventh start.
He finished first by a nose in a 1 1/8 miles turf allowance at BelmontPark last June but was disqualified and placed fifth. His first seven races were in France under the guidance of trainer Bary Pascal.
Added Baltas: “It’s a short field, the horse is doing well, so we’re taking a shot.”
The San Juan, which goes as race four: Generoso, Tiago Pereira, 12-1; Power Foot, Norberto Arroyo Jr., 7-2; Runasaurus Rex, Edwin Maldonado, 30-1; Inordinate, Corey Nakatani, 2-1; Syntax, Rafael Bejarano, 8-5; and Papacoolpapacool, Flavien Prat, 3-1.
PATIENCE PAYS OFF FOR OCTOGENARIAN McANALLY
Ron McAnally added another victory to his extensive Hall of Fame resume when he sent out first-time starter It’s Tiz Time to win Thursday’s second race by three-quarters of a length at 12-1 under Joe Talamo.
The victory was No. 1,068 for McAnally at Santa Anita, including Oak Tree meets.
A $125,000 Keeneland Sales purchase, the four-year-old Tiznow colt carried 123 pounds over 6 ½ furlongs in 1:16.49. He was in for a $50,000 claiming price, with no takers.
“He had problems in his two and three-year-old years,” said McAnally, who turns 85 on July 11. “That’s the reason he didn’t run until he was four. We gave him plenty of time.
“He looked good on the track, wasn’t sweating, and was ready to go. We trained him at Los Alamitos and brought him over here a couple weeks before the race, schooled him and did everything we had to do.
“We haven’t run many horses here (only seven through the Winter portion of the meet, with one third the best showing from his stable of 12 head).”
As for Talamo, the 27-year-old Louisiana native followed pre-race instructions to a T. “All he told me,” Joe said, “was don’t mess it up.”

FINISH LINES: Paradise Woods, winner of the Santa Anita Oaks by a race record margin of 11 ¾ lengths April 8, worked four furlongs at Santa Anita Friday in 47.60 for the Kentucky Oaks on May 5. “Beautiful,” is how Richard Mandella termed the move under Flavien Prat. “She’ll have a more serious work next Thursday or Friday and ship to Kentucky on May 1.” . . . Under the watchful eye of Doug O’Neill at Keeneland, San Vicente Stakes winner Iliad, with designs on the May 20 Preakness, worked a mile in 1:44 under Julien Leparoux . . . O’Neill stable hands at Santa Anita will be double-timing it Saturday morning as 35 horses are scheduled to breeze. “It’s not a record for us,” said assistant Leandro Mora. “We worked 40 two weeks ago.” . . . Two-time champion Songbird, ticketed for the Grade I Beholder Mile June 3, is scheduled to work four furlongs for Jerry Hollendorfer at 6:30 Saturday morning under exercise rider Edgar Rodriguez, while female sprint champion of 2016 Finest City is set to work four furlongs for trainer Ian Kruljac, who is mulling both the Beholder and the Grade I Humana Distaff at seven furlongs May 6 at Churchill Downs . . . Mike Smith, who rode Giacomo to a 50-1 upset for John Shirreffs in the 2005 Kentucky Derby, rides Girvin in the 143rd edition for trainer Joe Sharp. Girvin has the most Kentucky Derby qualifying points this year with 150 . . . Jockey Mario Gutierrez departed from California this morning for West Virginia, where he rides Gangster for O’Neill in Saturday’s $1,250,000 Charles Town Classic . . . There is a single ticket Pick Six Jackpot pool carryover of $197,929 into Friday . . . Every Saturday and Sunday at Santa Anita, fans can enjoy Family Fun Zone, featuring an Infield full of activities. A special $40 online only discount package includes food for four, two racing programs, two unlimited jumper wristbands, two pony ride vouchers, two face painting vouchers and eight carnival game vouchers. The package can be purchased online at santaanita.com/events . . . Fans at Santa Anita May 6 can enjoy the biggest Derby party west of Kentucky and see the 143rd Run for the Roses. Derby Day highlights include a Kentucky Derby Trackside event; a KROQ Super Games and Craft Beer Festival; a Chandelier Room Derby Party; a Kentucky Derby Hat Contest; the Bud Light Lounge; and a guaranteed Late Pick 4 pool of $500,000 and Pick 6 pool of $100,000.