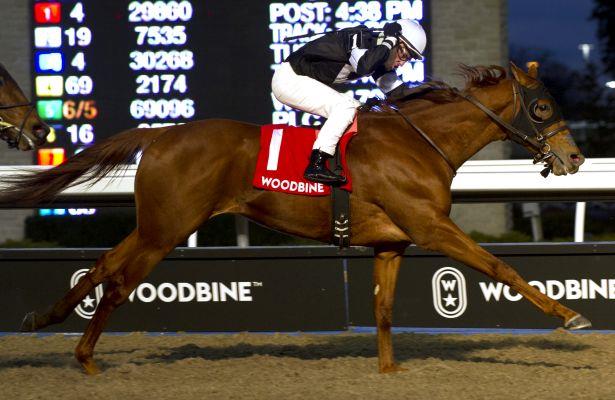 The Suburban, a 10-furlong test for 4-year-olds and upward, is one of five graded stakes on a loaded card headlined by the Runhappy Met Mile (G1), open to 3-year-olds and up, offering a berth in the Breeders' Cup Dirt Mile; along with the $400,000 Manhattan (G1) for 4-year-olds and up going 1 1/4-miles on turf; the $150,000 Poker (G3), a one-mile turf test for older horses and the $100,000 Victory Ride (G3), a 6 1/2-furlong sprint for sophomore fillies. Tracy Farmer's Sir Winston, trained by Hall of Famer Mark Casse, was a 10-1 upset winner of the 2019 Belmont Stakes. The Awesome Again chestnut, out of the Afleet Alex mare La Gran Bailadora, rallied from eighth in the "Test of the Champion" to outkick Tacitus for a one-length win. Sir Winston made a successful seasonal debut with a 2 1/4-length score in an optional-claiming mile at Aqueduct Racetrack on Jan. 31. After traveling for the Dubai World Cup, which was cancelled amid the COVID-19 pandemic, Sir Winston made his belated return on June 11 on a sloppy Belmont strip in the 1 3/8-mile Flat Out, running second by 5 1/4-lengths to Suburban rival Moretti. Casse said the Flat Out effort was deceptively good. "It was a lot to ask of him. There was no speed in the race and the sloppy track probably didn't help us either," said Casse. "He got a little tired, but he showed gameness to even run second. I think he'll run really well." Casse said the colt, who breezed a half-mile in 50.78 seconds on June 26 on Big Sandy, got a lot out of the Flat Out effort and is coming into Saturday's test in good order. "I think he got a lot out of it," said Casse regarding the Flat Out. "My biggest concern is that he got too much out of it. He came back and worked well. He's a happy horse and he loves Belmont." Joel Rosario, aboard for the Belmont Stakes score, will have the call from post 6. Juddmonte Farms' homebred Tacitus, a 4-year-old colt by Tapit and out of the Eclipse Award-winning mare Close Hatches, enjoyed a productive sophomore season posting a record of 7-2-3-2 with purse earnings of $1,634,500. Following Grade 2 wins in the Tampa Bay Derby and Wood Memorial at the Big A for Hall of Fame trainer Bill Mott, Tacitus rallied from 16th in the Kentucky Derby en route to being elevated to third. The ultra-consistent Tacitus followed up his Derby effort by completing the exacta in the Belmont Stakes and both the Jim Dandy (G2) and Runhappy Travers (G1) at Saratoga. He completed a lengthy campaign with a third in the Jockey Club Gold Cup (G1) in September travelling 1 1/4 miles on Big Sandy. The Suburban will mark the third start of the season for Tacitus following a fifth in the Saudi Cup (G1) in February and a fourth in the Oaklawn Handicap (G2) on May 2. Hall of Famer John Velazquez retains the mount from the inside post. Michael Fazio and Jeff Fazio's Joevia set the pace en route to a strong third in the 2019 Belmont Stakes. Trained by Gregg Sacco, the Shanghai Bobby colt captured the Long Branch at Monmouth Park in a productive 3-year-old campaign. After winning his seasonal debut in January in an optional-claiming sprint at the Big A, Joevia posted a pair of off-the-board efforts in the Razorback (G3) in February at Oaklawn and the Stymie in March at Aqueduct. Joevia then underwent surgery to correct a breathing issue and was subsequently fourth last out in the Westchester (G3) off a three-month layoff. Joevia will emerge from post 5 under Jose Ortiz. Repole Stable and Eclipse Thoroughbred Partners' Moretti, trained by Todd Pletcher, secured his first stakes score last out in the Flat Out with a frontrunning performance under Hall of Famer Javier Castellano. The 4-year-old Medaglia d'Oro colt graduated at second asking at Aqueduct in December 2018 and waited until May to secure his second career score when rallying from off-the-pace in an Oaklawn Park allowance route ahead of his Flat Out coup. Bred in Kentucky by Thoro-Bred Stables, Moretti is out of the Grade 1-winning Concerto broodmare Rigoletta who also produced Grade 1-winning millionaire Battle of Midway. He was purchased for $900,000 from the 2017 Fasig-Tipton Saratoga Select Yearling Sale Moretti will emerge from post 8 with Castellano. Chester and Mary Broman's New York-bred millionaire Mr. Buff will look to start another winning streak. The sizable 6-year-old Friend or Foe gelding enjoyed a three-race win streak from December to February at the Big A with scores in the Alex M. Robb, Jazil and capped by a 20-length romp in the Haynesfield. Last out, when second in the restricted Commentator at Belmont on June 12, Mr. Buff bobbled at the start of the one-turn mile and chased the early speed of Blewitt, but could not hold off the late charge of Funny Guy. He will exit post 4 under Junior Alvarado, who previously won the Suburban with Flat Out [2013], Effinex [2015] and last year aboard Preservationist. Rounding out the field are Parsimony [Kendrick Carmouche, post 2], Forewarned [Manny Franco, post 3] and Just Whistle [Irad Ortiz Jr., post 7].