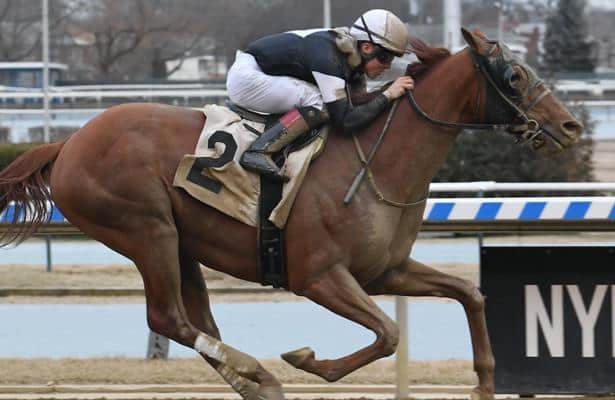 The 2019 Belmont Stakes (G1) champion was timed in 1:02.30 for his fifth workout at Gulfstream Park’s satellite training facility in Palm Beach County since concluding his resurgent 2021 campaign at Woodbine.

Sir Winston returned from a layoff of nearly a year to enjoy a solid four-race 2021 campaign, starting with an impressive Aug. 19 allowance win at Woodbine, where the Kentucky homebred finished a close second in both the Durham Cup (G3) and Autumn (G2) before winning the 1 1/2-mile Valedictory (G3).

“You might think, ‘What’s going on here?’ but this (was) the plan because he went a quick half last week,” trainer Jack Sisterson said. “We’re just going to step back this week and then he’ll have probably a half in company next week and be ready to go.”

“His (Jan. 9) work was his first one in company. I was debating whether to keep him at a half or go five-eighths. He’s been doing enough at a half-mile; he’s only going to do too much going five-eighths,” Sisterson said. “The work was not as planned.

“We worked another horse, (Grade 2-placed) In Effect, and he sort of got a little bit keen outside of (Channel Cat). It was beautiful to see Channel Cat relax inside. He was always traveling well and had a ton of horse left. We don’t want to run his race in the morning. He’s had a lot of air left in the tank in his works.”

Channel Cat has run in the Pegasus Turf before, never getting in contention after being bumped at the start in 2019 and finishing 10th for his previous trainer, Hall of Famer Todd Pletcher. Last winter, Channel Cat ran on the Pegasus undercard in the 1 1/2-mile W.L. McKnight (G3), finishing fifth.

Since joining Sisterson in mid-2020, Channel Cat has run eight times with one win, the Man o’War (G1) at Belmont Park last May. Most recently he was second by a neck in the 1 3/8-mile Red Smith (G2) Nov. 20 at Aqueduct.

“He’s a cool horse. He came in great shape off Todd, and I just didn’t want to ruin what Todd had done with him, so I just didn’t get in his way,” Sisterson said. “He’s an older horse, he knows his job, and he loves to get out there and train. If he’s not out there by 5:30, he shouts the barn down. If he’s not the first walk in the afternoon, again he shouts. We just try to keep him happy and not get in his way.”

Pletcher sent out two of his Pegasus Day probables out for half-mile works Friday on the dirt at Palm Beach Downs. Repole Stable’s multiple graded-stakes placed Never Surprised, last out winner of the Dec. 26 Tropical Park Derby at Gulfstream, went in 51.40 seconds while Robert and Lawana Low’s Sweet Melania covered the distance in 50.43.

Sweet Melania, who earned her third career graded-stakes triumph in the Dec. 18 Suwannee River (G3) at Gulfstream, is being pointed to the inaugural $500,000 Pegasus Filly & Mare Turf. Never Surprised could join his stablemate and defending champion Colonel Liam in the Pegasus Turf.