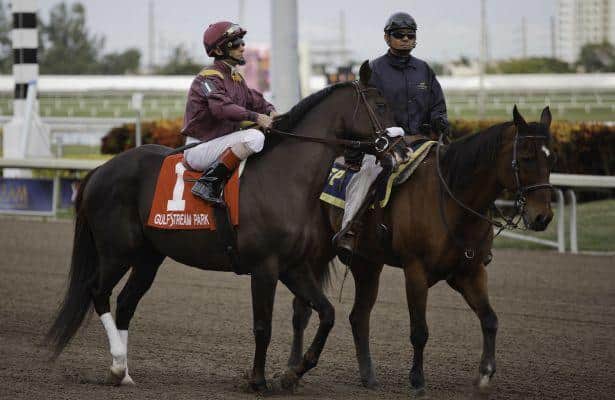 Singanothersong pressed fast early paces before drawing off with authority in an allowance on Nov. 17 and the $100,000 Mr. Prospector Stakes (G3) on Dec. 28.

“I was assistant trainer for John Tammaro for quite a while and John used to tell me, “If you can get a horse with speed to rate, you’ve got a very dangerous animal,' ” Pellegrini said. “That’s what we’ve tried to do with him, and we might have a dangerous animal.”

“He’s very relaxed. We’ve spent a lot of time with him to get him relaxed,” Pellegrini said. “Before, he was hyper and nervous and ran as fast as he could as far as he could.”

Singanothersong showed speed and promise last season at Gulfstream Park, where he won one of four starts, including a second-place finish in the Swale (G2). He went to the sidelines in April for arthroscopic surgery to remove a chip from a knee and returned from a six-month layoff with a close second-place finish in an October allowance.

“We took a chip out of the upper joint of his knee and he’s thrived ever since,” said Pellegrini, who awarded the return mount on Singanothersong to Juan Leyva.

Singanothersong will compete against a deep field of 10 rivals in the seven-furlong Gulfstream Sprint, including Laugh Track, the runner-up in the $1.5 million Breeders’ Cup Sprint (G1) at Santa Anita on Nov. 2.The Mark Casse-trained Laugh Track was well back in 11th place in a field of 12 before making a five-wide move on the turn and surging in the stretch to fall a neck short of catching Secret Circle in the six-furlong Sprint.

“I wish it was seven-eighths (of a mile), like Saturday’s race,” quipped Casse, whose Kentucky-bred will be ridden by Joel Rosario.

Laugh Track is unraced since finishing a troubled ninth in the Nov. 30 Cigar Mile, in which he bobbled at the start and subsequently was bumped.

“We wanted to get started somewhere and we thought going seven-eighths was a good place to start,” Casse said. ”

We thought about sending him to the General George in Maryland, but we might as well start at home.”

Laugh Track has shown the ability to stretch out around two turns, but the 5-year-old son of Distorted Humor has become a graded-stakes performer since being turned back to one-turn races. Laugh Track captured the Grade 3 Vigil Stakes at Woodbine at seven furlongs in June.

“His best races really have been sprinting. He’s actually very versatile. He can do anything,” Casse said. “His race in the Breeders’ Cup tells you how really good of a sprinter he is.”

While he has won at 1 1/16 miles on the front end in the past, Laugh Track has shown himself to be a closer in sprints.

“Hopefully, we get some pace to run at,” Casse said.

The Gulfstream Park Sprint has attracted a strong collection of other veteran performers, including defending champion Fort Loudon, The 5-year-old son of Awesome of Course finished second behind Singanothersong in the Mr. Prospector before breaking slowly and finishing out of the money in the Sunshine Millions Sprint on Jan. 18. Trainer Stanley Gold is also slated to saddle $1.8 million earner Jackson Bend. The Florida-bred 7-year-old, who is a two-time Grade 1-stakes winner, most recently finished second behind Lea in the Hal’s Hope (G3) at a mile.

The Todd Pletcher-trained Catron will concede experience to his opponents, having only run twice in his life. However, the 4-year-old son of Distorted Humor is not lacking the raw ability to match strides with the veteran performers. After breaking his maiden at first asking by three lengths at Belmont last June, Catron returned from a six-month layoff to crush entry-level allowance rivals by 4 ½ lengths in hand at Gulfstream on Dec. 22.

Brujo de Olleros, who finished third in the Breeders’ Cup Dirt Mile (G1) at Santa Anita in his most recent race on Nov. 1; Falling Sky, a Grade 3 stakes winner who finished second in a recent Gulfstream allowance; and Reveron, the 2012 Gulfstream Derby winner and Florida Derby (G1) runner-up; are also scheduled to run in the 39th running of the Gulfstream Sprint. Purple Egg, Narvaez and Silver Menace round out the field.