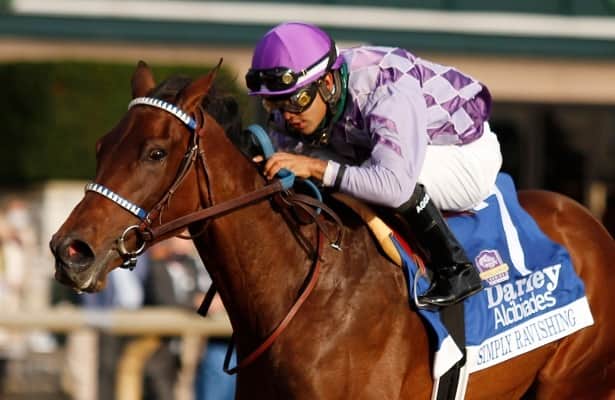 Simply Ravishing, who displayed top-level ability as a 2-year-old when winning the Grade 1 Alcibiades, has been retired.

"We just didn't feel like she was going have a chance to run at her full potential this year and we decided that that we are going to breed her," trainer Kenny McPeek told Horse Racing Nation.

Stallions under consideration include Tapit, Into Mischief and Curlin.

"The No. 2 possibility is that she'd be run through the November sales," McPeek added.

By Laoban out of the More than Ready mare Four Wishes, Simply Ravishing broke her maiden on debut at Saratoga in September, then went on to win the black-type P.G. Johnson Stakes and the Alcibiades at Keeneland before finishing the year with fourth-place finishes in  both the Breeders' Cup Juvenile Fillies and the Golden Rod (G2).

In her only start this year, Simply Ravishing finished sixth last Saturday's Ashland (G1) at Keeneland.

Simply Ravishing was one of several star fillies in McPeek's barn, led by Eclipse winner Swiss Skydiver, winner of five wins in 10 starts at nine tracks, including a win over Authentic in the Preakness. She won her first 2021 start in the Beholder Mile (G1) in March.