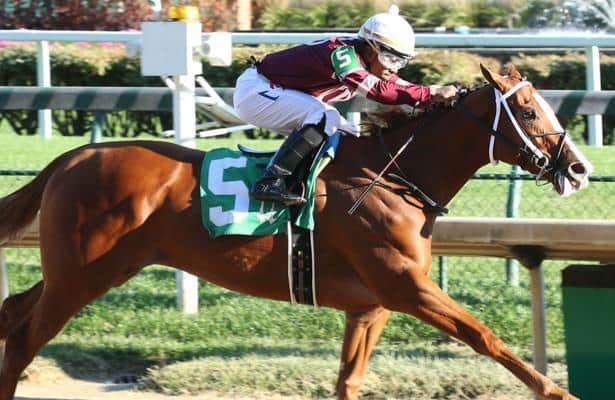 With the morning line favorite in the Silverbulletday Stakes and two more runners in the Lecomte Stakes (G3), Winchell Thoroughbreds is using Saturday’s Fair Grounds card as a launchpad to bigger things for its newly turned 3-year-olds.

Finite will face seven others in the Silverbulletday -- a Kentucky Oaks prep contested at a mile and 70 yards -- while Halo Again and Silver State will traverse 1 1/16 miles as part of a full field on the 2020 Kentucky Derby trail in the Lecomte. David Fiske, racing manager for Winchell Thoroughbreds, said that afterward, planning will commence for the rest of their campaigns. “In another month or six weeks, there are a lot of races coming up for 3-year-olds,” Fiske said. “There are races at Oaklawn, races at Fair Grounds. It’s early in the year. We’re sorting them out -- trying to figure out who deserves to go where.” A $200,000 purchase as a 2-year-old in training, Finite enters the Silverbulletday on a three-race winning streak, most recently becoming a graded winner of the Golden Rod (G2) last November at Churchill Downs. “She’s been training well, and it’s a good place to start her,” Fiske said of the Munnings filly. “It’s a new year. We’ll see how far down the trail we can get.” Winchell Thoroughbreds sports a rich history in the Oaks, as Finite’s trainer, Steve Asmussen, previously readied Summerly and Untapable for victories in 2005 and 2014, respectively. This horse is owned in partnership with Thomas Reiman, William Dickson and Deborah Easter. Before Finite’s Golden Rod, she broke her maiden on Kentucky Downs’ turf -- Winchell is co-owner of the track -- and switched back to the main track to take Churchill’s Rags to Riches Stakes. The filly broke her maiden at third asking, and Fiske continues to see her improve. “She’s gotten faster,” he said. “Really she hasn’t changed too much other than getting a little bigger and putting some weight on -- just getting faster. She’s always been a kind filly, and that hasn’t changed. She has a great demeanor -- doesn’t get upset about much.” From post six in the Silverbulletday field of eight, Finite’s the 6-5 shot to beat. Fiske pointed out she’s the only graded stakes winner and three-time winner in the bunch with post time at 6:23 p.m. ET. Should Finite find the wire first, there won’t be too much time for celebration. The next race on the Fair Grounds card is the Lecomte, where two more Asmussen trainees will go forward for Winchell Thoroughbreds in partnership with Willis Horton Racing. Halo Again, a 15-1 shot from post 7, is 2-for-2 after breaking his maiden at Churchill Downs in late October, then winning the Nov. 23 Coronation Futurity over Woodbine’s synthetic. That race was also contested at 1 1/8 miles, a distance only one Lecomte rival, the longshot Enforceable, has attempted.  “We were pretty impressed by his effort given that it was only the second start in his life,” Fiske said. “He had to ship. He had to run on synthetic. He had to run a mile and an eighth. That’s a lot of new stuff to overcome. We thought he handled himself pretty well.” While the Lecomte kicks off Fair Grounds’ series of preps for the Kentucky Derby, the Ontario-bred Halo Again could have a return trip to Canada on his calendar given he’s eligible for races such as the Queen’s Plate this summer. “Out of the corner of our eye, we have to keep that option open -- the Queen’s Plate,” Fiske said for the $600,000 yearling purchase. “Going back up there is an option.” Silver State, a 5-1 shot from post No. 9, also won on debut at Churchill Downs in a Sept. 27 dead heat. He returned to the track in allowance company two months later, finishing a nostril away from going 2-for-2. “I thought he had won,”Fiske said. “I saw the photo and I could swear it was a dead heat as well, which I thought would have been really cool to win his first two races.” A $450,000 yearling, the Hard Spun colt did not appear to be bothered by the sloppy Churchill Downs main track last out, an important point given the forecast for rain all weekend in New Orleans. The Lecomte, which runs as Saturday’s finale, has a post time of 6:55 p.m. ET.