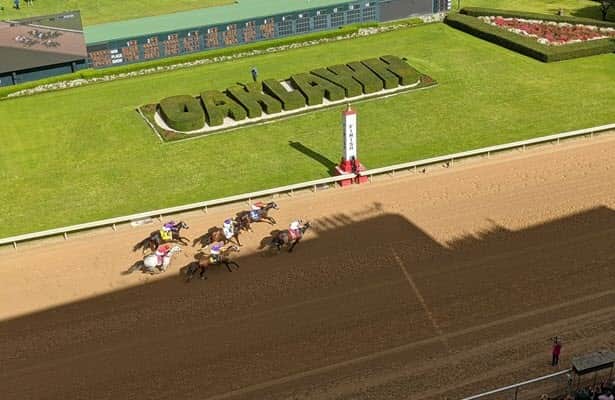 Five wins in a row are certainly attention getting. When the fifth happens in a $1 million race on the co-owner’s 82nd birthday, that sets it apart.

That is just what happened Saturday at Oaklawn Park, where Silver State (9-2) made a strong closing run down the middle of the track, emerging from six horses spread across the homestretch to win the $1 million Oaklawn Handicap (G2) for Willis Horton.

Ricardo Santana Jr. kept the 4-year-old Hard Spun colt in mid-pack before he called for the decisive move in the last quarter-mile of the race to win by a half-length over Fearless (5-2). Post-time favorite Express Train (9-5) was third, another length behind. Owendale (4-1) was outkicked late and finished fourth.

Silver State digs in with @RSantana_Jr aboard and surges to the front with a sixteenth to go in a wide open $1,000,000 G2 Oaklawn Handicap @OaklawnRacing! That's now five in a row for the 4yo colt. pic.twitter.com/JvUulDfq93

Quietly accepting birthday and victory congratulations from well-wishers on the way back up the racetrack elevator to the owners boxes, Horton had a glint in his eyes that was unmistakable.

“The Hortons owning half of this horse with Winchell (Thoroughbreds), and knowing how important Oaklawn is to them and how important the Hortons are to Oaklawn,” winning trainer Steve Asmussen said, “what a great birthday present for him today.”

It was also a great result for Asmussen, who had won seemingly every big race Oaklawn had to offer except this one. He did it with a colt that was rested for seven months after coming up short on last year’s Kentucky Derby trail. Silver State has been nothing but a winner since.

“He is a horse that the Hortons and Winchells purchased on Dr. (David) Lambert’s advice that has continued to develop and get better,” Asmussen said. “We’ve always loved his talent level. But for the five-race win streak and putting it all together against such a talented field today in a significant race, we’re extremely pleased with him.”

On the way to his first Oaklawn Handicap victory, Santana was almost insouciant taking Silver State as far back as seventh through the first six furlongs. Warrior’s Charge (6-1), who would finish fifth, set the early pace with fractions of 22.73, 47.06, 1:11.67 and 1:37.23 for the opening mile.

Silver State pierced the wide vanguard of horses by going into the “4” path in the stretch. His response to Santana’s urging looked push-button.

“The horse has been training really well,” Asmussen said. “He’s figured out winning.”

Especially at Oaklawn, where Silver State has had his last three starts, including wintertime victories in the Fifth Season Stakes and the Essex Handicap, both listed races.

“What we saw in the two races here previously, he chose to win,” Asmussen said. “They were very competitive just like today. That’s made all the difference in him.”

This is the second Saturday in a row at Oaklawn that Asmussen and Santana teamed to win a million-dollar race. Last week, they scored with Super Stock in the Arkansas Derby (G1).

Bought as a yearling for $250,000, Silver State will have a Grade 1 race on his radar, but Asmussen did not say which one it might be.

“This race is significant enough that he’ll get the future we were hoping for,” he said. “This proves it.”