Silver Freak Lives Up To His Name 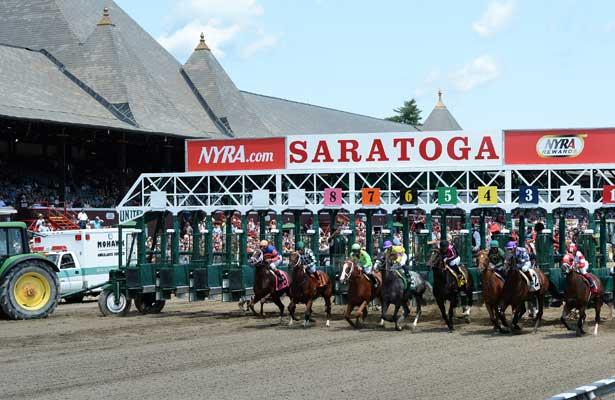 Silver Freak lived up to his name in Saratoga's eighth race on Wednesday, an optional claiming event. The 5-year-old gelding spurted away from the field early, leading his opposition through strong fractions of 23.48 seconds for an opening quarter-mile and a half in 46.80. After three-quarters in a swift 1:10.05, Silver Freak continued his tour de force down the stretch, completing the one-mile distance in 1:33.58 - just .16 seconds off the track record.

"He ran a fantastic race," Brian Lynch, who trains Silver Freak for Rajendra Maharajh, by telephone. "We got fortunate he got loose on the lead. I thought [Joe's Blazing Aaron] might go with him, but when that one didn't challenge us we were left alone on the lead. He's a very dangerous horse when left alone."

Silver Freak has a habit of running freakishly well. The son of Badge of Silver turned in a similarly devastating performance over the winter at Gulfstream Park, running 1 1/16 miles in 1:39.24 after getting an uncontested lead. After two subsequent disappointing performances as the odds-on favorite - one at Gulfstream and one at Woodbine - Silver Freak rebounded on Wednesday at 5-1.

"He struggles with Woodbine; I think it's the one turn and the long stretch," said Lynch. "One of his best attributes is that he runs turns so well. He gains a little ground on the turn, and he gets a little bit of a breather as [the field] has to chase him."

The electrifying turfer may get another crack at two-turn racing at Saratoga in the Grade 2, $250,000 Bernard Baruch Handicap on August 30, according to Lynch.

"There's always a possibility he'll be back [for the Bernard Baruch]," said Lynch. "He's back up at Woodbine now and he looks very well. We'll nominate to the race and see what happens."

Tricky Hat became a two-time stakes winner when he got his nose down at the perfect time to take the restricted John's Call on Wednesday, but it's taken patient handling by Hall of Fame trainer Shug McGaughey to get the gelding to where he is today.

Bred in Chile, Tricky Hat won a single race in his native country before he was purchased by owners Andrew Rosen, Robert Trussell, and Gainesway Stable and sent to the United States. He had one win and a pair of third-place finishes in his first six starts for McGaughey before he won an optional claimer at Saratoga and the Laurel Turf Cup a year ago.

Following the Laurel Turf Cup, Tricky Hat was third in an off-the-turf edition of Keeneland's Sycamore last fall, second in an allowance and fifth in the Grade 2 Elkhorn in April at Keeneland, and last of 14 in the Grade 2 Monmouth Stakes in June prior to his victory in the John's Call.

Tricky Hat is by Hat Trick, making him a grandson of Sunday Silence, the nemesis of McGaughey's protégé Easy Goer. McGaughey said a combination of Tricky Hat's temperament and a slow acclimation process forced him to bide his time with the 5-year-old.

"He's a little fiery," said McGaughey. "They bought him in Argentina, and he was already a gelding. It took him a long, long time to adapt. I'm talking a year and a half to two years before he even got to looking right. He was a lot nastier then than he is now. I kept training him, and he got healthier. He's good now."

McGaughey said he will consider the Laurel Turf Cup, the Grade 3 Sycamore at Keeneland, or possibly a race over the all-weather surface at Woodbine for Tricky Hat.

On Friday, McGaughey will send out first-time starter Co, a granddaughter of Hall of Famer and top broodmare Serena's Song, in race 4, a 5 ½-furlong maiden special weight on the turf for 2-year-old fillies.

Co hails from a family that has been successful on both the dirt and the turf, and her sire, Candy Ride, has sired runners who have succeeded on dirt, turf, and synthetic surfaces.

"I worked her only once on the grass, but she worked fine," said McGaughey. "I think the Candy Rides have been better on the turf and synthetic than they have been on the dirt, so that was a little bit of my thinking. She was at Fair Hill and she trained on the Tapeta, and she liked that. I think she'll run on the dirt, though. She worked real well out of the gate on a wet-fast track, so if it rains, that wouldn't hurt her, either."

With a sensational turn of foot through the lane in a 5 ½-furlong turf optional claimer on Wednesday, 4-year-old Tapit filly Quay showed she might be ready to tackle stakes company for owner Marc Keller and trainer Bobby Ribaudo.

Trailing the field of eight through a half-mile in 45.39 seconds, Quay took a few taps from jockey Jose Ortiz and took off along the rail to win by three-quarters of a length in a time of 1:02.48. She got the final half-furlong in a blazing 5.78 seconds.

"She tries all the time," Ribaudo said. "Her best distance is the one turn. Probably six or seven [furlongs] might be a little better for her, but she's run well at 5 ½ like she did yesterday. Her title now is 'Come-From-Behind Sprinter.' You hope she stays sound and her mind stays good. We're keeping our eyes open for stakes races now."