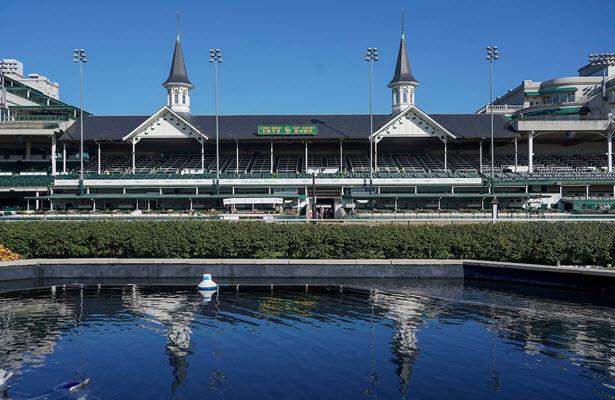 On a normal Kentucky Derby weekend, more than 100,000 people would pack into Churchill Downs to take in one of the biggest sporting events of the year. Bourbon would flow, cigars would be lit and wagers would be made.

But 2020 has been anything but a normal year, and that held true for Derby weekend at the track. Held in September for the first time ever, one of the most noticeable features of the 2020 Kentucky Derby and Oaks was silence under the Twin Spires.

Race two on Oaks Day took off right on time. Salty As Can Be took the win by a nose over Amusing Tactics. On the track, it was a perfectly normal day for the Kentucky Oaks.

Elsewhere at Churchill Downs, it was anything but. The venue, normally dominated by a roaring crowd, clad in their finest pastel seersucker suits and enormous hats, was silent but for the crack of the whips and the buzz of a helicopter circling overhead.

A golf cart rolled along the concrete in the infield, able to be heard clearly from the highest level of the grandstands under the twin spires.

“This is your first time here?” a Churchill Downs employee asked on the walk across the grounds. “It’s a real shame. Perfect weather — normally all of this would be so full you couldn’t even walk through.”

It was indeed perfect weather, topping off around 80 degrees, with clear skies and just enough of a breeze. In another ironic twist for a horrible 2020, this would have been the nicest Derby weekend in a few years.

The usual Derby weekend in May was beautiful too, but the races didn’t happen then. It’s September now, the rescheduled race date set in hopes of having a crowd — surely we’d be rid of that damned pandemic by September. Those dreams slowly dissipated through the weeks leading up to the Derby, with initial hopes of having over 60,000 people attend seeming half-cocked from the beginning, then dropping to 23,000, then canceling altogether because of pandemic or protest, nobody would say.

In the track announcer’s office on the sixth floor, surrounded by 50-packs of Ricola cough drops, the wrappers of which filled a University of Kentucky-branded Dasani bottle, Travis Stone felt as strange as anyone.

“It’s bizarre,” Stone said just before the eighth race on Oaks day. “It feels like I’m calling races on a Friday. Well, I am, but a typical Friday.”

Even the Mansion, an area for the most exclusive of Derby attendees, was left unguarded on Thursday. The secret entrance on the ground floor was used by a photographer shooting overhead photos of the finish line.

In the paddock area, normally swamped with attendees, movement was free and clear, which made it easy to note the level of security at Churchill Downs. Police officers moved in groups, clad in black masks, a requirement for entry.

For the Oaks itself, the noise amplified. Most of the owners were there and the cheering was less subdued than before. Even so, before the race, the sound of the Vineyard Vines-branded tractor still could be heard clearly from the stands.

On the way out, the grounds — normally covered with cups, losing betting tickets and bodily fluids — were clean. Not a speck of trash anywhere.

Fifty years after Hunter S. Thompson’s legendary piece on the Kentucky Derby, the decadent depravity he wrote of was nowhere to be found. In the paddock in the morning, women wearing traditional Derby dresses mingled with men in loud suits.

But the few revelers were nearly outnumbered by employees and news cameras getting set up for the day.

When the news of a nearby hostage situation reached Churchill Downs, those inside were entirely insulated from the situation near the backside. There was no announcement, no noise to be heard from the stands. Without social media, the track could have been an island, unaware of the chaos surrounding it.

In the owners section, one man pulled his mask low enough to smoke a cigar, the only one visible in the venue at that moment. In normal times, the air would be thick with the smog of Cuba’s finest, but this year, the cigar struck a rebellious tone.

That area had more energy than anywhere else in the venue, in part because of the amount of people. Many of the owners seemed to be continuing their normal Derby Day activities, albeit farther apart.

In the infield, the school buses that ferried the Sackatoga Stable connections to the venue were clearly visible. In place of the traditional crowd, the buses were amid a crowd of parked cars, Kentucky’s biggest party reduced to a still parking lot.

Race 10, the Iroquois Stakes, rolled around a little after 4 p.m. In another oddity that could happen only in 2020, the race was a points race for the 2021 Road to the Kentucky Derby, despite the 2020 edition not being scheduled to run for another three hours.

A little more than an hour before the Derby, protesters arrived at the fence outside the track. Again, nobody who didn’t know where to peek through a gate would ever know they were there. Fort Churchill remained unbreached by the outside world.

That silence broke as the big race grew near. A plane flew overhead, a banner behind it displaying seven words that have been on the tongues of many in the last 100 days: “Arrest the cops who killed Breonna Taylor.”

That and a moment of silence before the playing of My Old Kentucky Home were the only reminders inside the venue that, even ignoring the pandemic, the world wasn’t quite OK.

The first time it seemed that a major sporting event was going on was during the race. A flock of brightly clad owners moved from the paddock to their assigned seats and raised their voices in the stands as the horses flew by.

Bob Baffert got another win, tying the record for the most all-time Derby victories.

Finally, something normal at the 2020 Kentucky Derby.