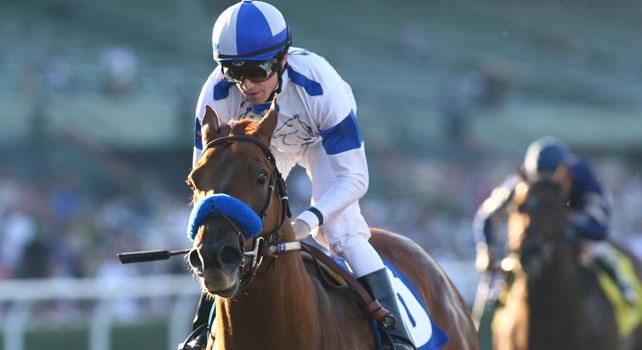 ARCADIA, Calif. (Feb. 15, 2010) – Sidney’s Candy regained a huge measure of the high expectations he had generated following a dazzling maiden victory last summer at Del Mar with a comparable triumph on Monday in Santa Anita’s 69th running of the Grade II, $150,000 San Vicente Stakes for 3-year-olds.

Following a disappointing comeback performance in an allowance event on Dec. 30 at Santa Anita, Sidney’s Candy simply ran away from his opposition in the seven-furlong stakes race that has served as a proving ground for nine Kentucky Derby champions.

With Joe Talamo sitting confidently in the saddle, Sidney’s Candy matched strides early with trainer Bob Baffert’s Tiny Woods, who had beaten him twice, before leaving his rival 4 ¼ lengths in arrears when crossing the wire in 1:20.91, making it the second fasted running in the San Vicente’s long, rich history.

“I was confident he’d bounce back with a good effort today,” Talamo said of the homebred son of the brilliant Candy Ride trained by John Sadler for the Sid and Jenny Craig Trust. “John (Sadler) told me to just get a good start and go from there. At the three-eighths, I just kind of clucked to him and he got right into the bridle.

“They’ve done a great job with this horse. I just basically sat on him today, and I couldn’t believe that final time. That’s awesome. It’s very exciting to have a horse of this caliber.”

Tiny Woods, after chasing Sidney’s Candy through fractions of 22.77, 45.50 and 1:08.62, held second by 1 ¾ lengths over Classical Slew in the field of seven. Baffert’s other entrant, 5-2 second choice Quiet Invader, finished fifth.

Sadler dismissed the previous race by Sidney’s Candy when he wound up fourth in a five-horse field at odds of 3-5 following four months on the sidelines while sore shins healed.

“In his last start, he had been off four or five months,” said Sadler. “He was a little heavy and he didn’t break. He’s kind of a free-running horse, so when he got out of his game the other day, it didn’t surprise me that he didn’t run well.

“We want him to do what he does, which is kind of bouncing around a little bit with some natural speed. Once I saw him get rhythmic today, I knew we were going to be fine. The plan today was to get him back on the lead.”

Sadler commented that he wasn’t sure what would be next for Sidney’s Candy, but said, “The reason I didn’t want to go into an allowance race is because of the graded earnings for the big stuff (Kentucky Derby). He’ll be going around two turns next time, that’s for sure. Which one of those races it is, we don’t know yet.”

The victory in the San Vicente was worth $90,000 to Sidney’s Candy, which lifted his total to $133,560 from a 2-1-0 mark in four starts. Tiny Woods had beaten him by a head in his first start on July 25 at Del Mar and again when victorious in the comeback effort.