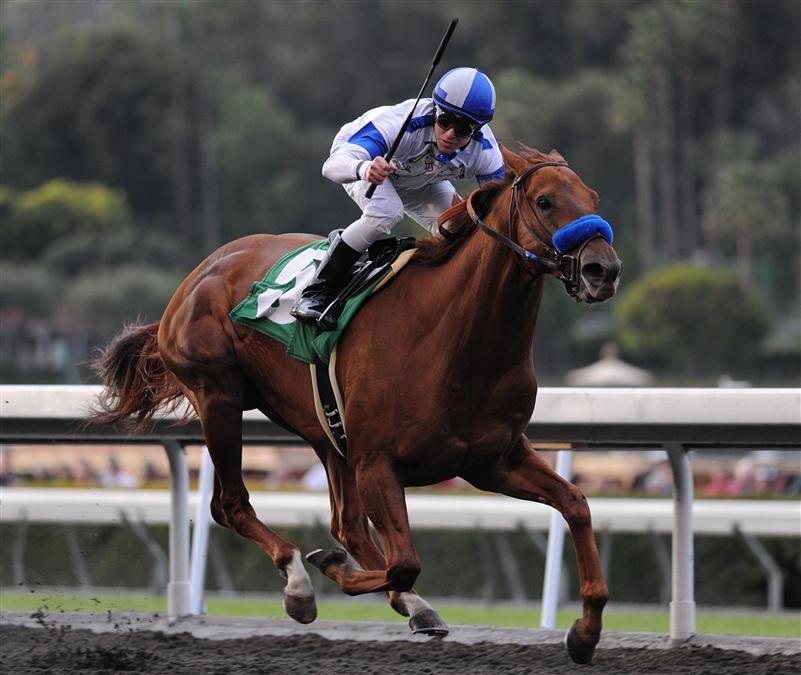 Multiple graded stakes winner Sidney’s Candy will make his first start since the Kentucky Derby on May 1 when he takes on four other 3-year-olds in the $200,000 Swaps Stakes Saturday at Hollywood Park.

The Swaps, which is run at 1 1/8 miles over Cushion Track, is one of a pair of Grade II races on Saturday. The other is the $150,000 A Gleam Handicap for older fillies and mares at seven furlongs.

A homebred owned by the Craig Family Trust and trained by John Sadler, Sidney’s Candy will be seeking his fifth win in eight starts and his fourth graded stakes victory of 2010.

Earlier in the year at Santa Anita, Sidney’s Candy, who finished 17th in the Kentucky Derby after pressing the quick early pace, won, in succession, the San Vicente, San Felipe and Santa Anita Derby.

Joe Talamo, who was third aboard Scorewithcater in the 2009 Swaps, will ride Sidney’s Candy, who has earned $673,560. This will be the first start for the chestnut at Hollywood Park.

Skipshot, who finished second in the Affirmed Handicap on June 19. He was a half-length behind favored Golden Itiz, who is skipping the Swaps after he failed to work to the satisfaction of trainer Ron Ellis.

Trained by Jerry Hollendorfer for owner Olympia Star Inc., Skipshot, a son of Skip Away and the Sunny’s Halo mare Heavenly Note, has won three of nine. The $120,000 2-year-old purchase has earned $93,030.

In his only other attempt at nine furlongs, he was fifth in the Santa Anita Derby. Skipshot finished 7 ¾ lengths behind Sidney’s Candy that afternoon.

Sadler and the Craig Family Trust is also scheduled to run Twirling Candy and he will be coupled in the wagering with Sidney’s Candy.

A son of Candy Ride and the Chester House mare House Of Danzing, Twirling Candy is undefeated in two starts. However, he has yet to run beyond seven furlongs.

Alphie’s Bet will be looking for his second stakes win of the meet at the distance for owner-breeders Peter O. Johnson Sr. and Teresa McWilliams and trainer Alexis Barba.

The Tribal Rule colt out of the Candi’s Gold mare Miss Alphie won the Snow Chief at 1 1/8 miles on April 24, beating Working Capital and six other California breds in the main event on California Gold Rush Day on April 24.

Most recently, Alphie’s Bet was third in the Affirmed, finishing one length behind Golden Itiz. He has won three of nine and earned $273,320. He owns another win at nine furlongs, having captured the Sham Stakes on March 6 at Santa Anita.

Completing the field is Summer Movie, who was fourth in the Affirmed. A gray son of Holy Bull out of the Summer Squall mare Crazy Summer Fling, Summer Movie has won two of six – both on turf – for owner George Krikorian and trainer Art Sherman. He has earned $59,000.

In the A Gleam, Sadler will try to make some history when he sends out Emmy Darling against five opponents.

Sadler would become the first trainer to win the race, which will be run for the 56th time Saturday, three years in a row. He would also tie Clyde Turk, Bobby Frankel and Laz Barrera for most A Gleam victories with three. Sadler has won the last two years with Dearest Trickski and Evita Argentina.

Owned by Ike and Dawn Thrash, Emmy Darling, a 4-year-old Graeme Hall filly and the Colonial Affair mare Dance Delight, returns to California after finishing off the board in the Winning Colors, a Grade III, on May 31 at Churchill Downs.

Purchased as a 2-year-old for $260,000 at the Ocala March Sale in Florida in 2008, Emmy Darling will be aiming for her second stakes win at Hollywood Park.

After finishing far behind Rachel Alexandra in the Fleur de Lis on June 12 at Churchill Downs, Made For Magic returns to the scene of her most significant win.

Trained by A C Avila for owners Mike Lamb and L-Bo Racing, the 5-year-old Cape Canaveral mare and the Exploit mare Only Seventeen won the Milady, a Grade II, at nearly 10-1 on May 16.

Will O Way, who finished fourth of sixth in the Vanity on June 13, will cut back in distance for owners Edward Taylor and David and Holly Wilson and trainer Vladimir Cerin. The 4-year-old daughter of Broken Vow and the Woodman mare Willow Woodman has won three of 14. Her bankroll stands at $192,500. She is winless in four races at seven furlongs.

Free Flying Soul will be looking for her third win at Hollywood Park, but her first in a graded stakes. Previously, she has won the Winter and the Desert Stormer for owner Marsha Naify and trainer Bruce Headley.

A 5-year-old Quiet American mare out of the Farma Way mare Ruby Surprise, Free Flying Soul has six wins in 15 attempts. The top weight at 122 pounds, she has earned $393,177.

Sweet August Moon, who was fifth in the Desert Stormer on June 12 and Moon de French round out the field.

Owned by Zayat Stables and trained by Bob Baffert, Moon de French is a 5-year-old Malibu Moon mare out of the French Deputy mare French Silk who has won three of six. Her bankroll is $107,302.

The A Gleam is the fourth of 10 races while the Swaps is the ninth. Post time Saturday is 1 p.m.