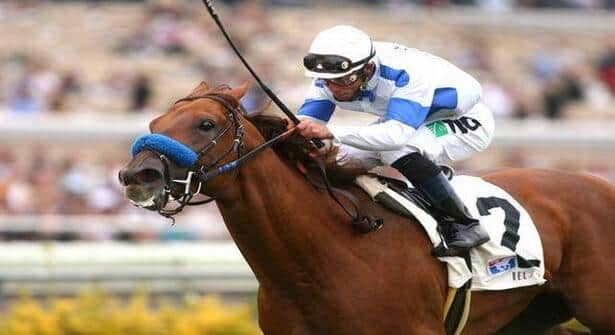 Sidney’s Candy made his first start in New York for new connections a sweet one Sunday afternoon at Saratoga Race Course, leading from start to finish to take the 27th running of the Grade 2, $150,000 Fourstardave Handicap.

Sharpest out of the gate, the 4-year-old son of Candy Ride controlled an easy pace, loping through an opening quarter in 25.83 and a half-mile in 50.49. Maintaining a comfortable lead throughout, he was prompted by jockey John Velazquez at the top of the stretch and finished 1 ¼ lengths clear of Moryba and Beau Choix, who were second and third at every call. The winner’s final time for 1 1/16 miles was 1:43.25 over firm turf.

“It was pretty easy,” said Velazquez. “He broke sharp. I know there was no speed in the race. When we got to the first turn, I put my hands down and he rated himself in the slow pace. I waited for them to come at us at the quarter pole before I asked him to do anything. I was a little cautious. As soon as I asked him, he responded and it worked out well for us.”

Sent off as the 1-4 favorite in the field of seven, Sidney ’s Candy returned $2.60 to his Spa backers.

“He relaxed beautifully and Johnny said he was just going to go as fast as whoever was going to make him go,” said Todd Pletcher, who trains the colt for WinStar Farm. “Johnny said it is a little soft out there still, even though it’s upgraded to firm today. I thought it was a very professional effort. He had to quicken on softer ground than he’s used to, and he quickened really well. The one disadvantage to having real soft fractions is that it kind of leaves everyone in the race and turns into a sprint home, but he did it very well.”

It was the first victory this year for Sidney ’s Candy, who previously was based in California and trained by John Sadler to five graded stakes victories on turf, dirt and synthetic surfaces, including a 4 ½-length score in the Grade 1 Santa Anita Derby as a 3-year-old. Sold privately to WinStar farm and transferred to Pletcher in late spring, the colt had not raced since a nose defeat to Ryehill Dreamer in the Grade 2 American Handicap on the turf at Hollywood Park on May 28.

“I’m just very pleased,” said Elliott Walden, president and CEO of WinStar Farm. “It’s a little bit of a relief when you run a horse for the first time; obviously a big favorite. The pace scenario was a little unusual, especially for a horse that comes from California and wants to run in 22 and change, 45. I was a little apprehensive about him going that slowly, but he finished up nicely, which was exactly what we wanted.”

Blues Street, Turallure, Paris Vegas and Voodoo Swinge completed the order of finish in the Fourstardave.