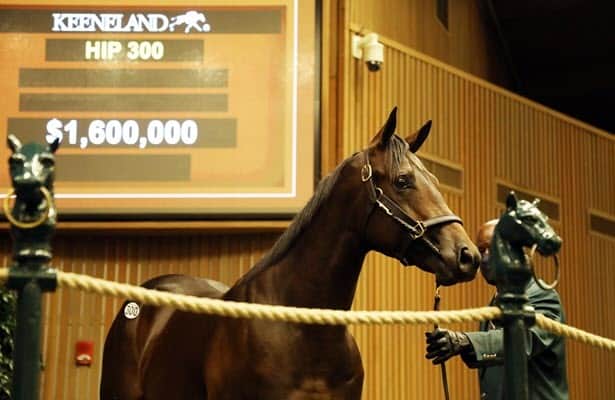 Keeneland concluded the Book 1 portion of its September yearling sale on Tuesday with vibrant trade among major domestic and foreign buyers that produced strong results and the sale of eight seven-figure yearlings, led by the $1.6 million paid by Woodford Racing and West Point Thoroughbreds for a Quality Road colt who is a half-brother to Grade 1 winner Girvin and 2021 Preakness (G1) and Travers (G1) runner-up Midnight Bourbon.

“It was a great couple of days. We’re really excited about the results, about the feeling and the excitement on the grounds,” Keeneland president and CEO Shannon Arvin said. “You’ve probably heard me say that (retiring Keeneland Director of Sales Operations) Geoffrey Russell likes to talk about the ‘hustle and bustle,’ which felt really present. It was a very diverse buying bench. Out of the 10 highest prices today, there were nine distinct buyers, which is encouraging to see along with the domestic and international participation.”

“The session was electric, full of optimism,” Keeneland vice president of sales Tony Lacy said. “The sellers were having as much fun as the buyers, which across the board is what we’re trying to encourage. That’s an incredible mark when we get to that.

“The median was $350,000 cumulative over the last couple of days, $400,000 for the session alone. I don’t think we’ve ever hit $400,000 (for a session). Cumulatively it’s just short of 2019, which was a record year. As we go forward, I think it’s really encouraging. It sets a really good tone for Book 2. When you see results today where Woods Edge Farm sold a homebred for over a million dollars, that floats a lot of boats.”

The $1.6 million colt, the highest-priced yearling to date in the sale, is out of the Malibu Moon mare Catch the Moon and was consigned by Eaton Sales, agent for Stonestreet Bred & Raised. He also is a half-brother to Grade 3 winners Cocked and Loaded and Pirate’s Punch. Half-brother Midnight Bourbon won a Grade 3 race earlier this year.

“The plan is to gather a partnership together with Woodford Racing, West Point and a few others and (Stonestreet owner) Barbara Banke,” Woodford founder Bill Farish said. “He will go to (trainer) Shug McGaughey.

“The market is strong,” Farish added. “For horses like this, it’s been very, very hard to buy as you can tell by that price. It’s competitive. That’s how we hoped it would be.”

“He is fabulous looking and, of course, the mare has had some great foals by some lesser stallions,” Banke said. “I am hoping this one takes it all the way. I think I will be back in for (a piece) of him. I am excited about that. He was on my list of favorites. We need sire power; we need another sire.”

Two colts consigned by Gainesway, agent, sold for $1.3 million each.

Mandy Pope’s Whisper Hill Farm paid the amount for a son of Tapit from the family of champion Jaywalk and Grade 2 winner Mission Impazible. He is out of stakes winner Danzatrice, by Dunkirk.

“I love Tapit, as everyone knows – we’ve been buying a bunch of them,” Pope said. “This one was raised at Gainesway. I have a lot of faith in how they raise their horses and their horsemanship on the farm. I felt like the horse had a good beginning, a good foundation built into him.”

Two hips later, Gainesway, agent for Stonestreet Bred & Raised, consigned a son of Curlin out of Dashing Debby who sold to M.V. Magnier for $1.3 million. The colt is a half-brother to Grade 1-placed stakes winner Dawn the Destroyer and stakes winner Bronze Star.

“(Gainesway General Manager) Brian Graves – when we went down to see him first – really, really liked the horse,” Magnier said. “All our guys liked him as well. Barbara Banke, she’s bred some incredible horses over the last couple years. Curlin’s doing very well.”

Magnier said the colt would stay in the U.S.

“All class, everything she is supposed to be and maybe a little better,” said Eddie Woods, who signed the ticket. “Has a little more leg and scope than most of your War Fronts. She vetted perfectly; she may go to Ireland. The client couldn’t travel. I’m just doing a job that normally they would do on their own.”

Out of the stakes-winning A.P. Indy mare Vaulcluse, the filly also is a half-sister to Grade 3-placed stakes winner Arrifana.

“She’s just an absolutely lovely filly – best filly we had on the farm,” Gainesway’s Brian Graves said. “We wish them a lot of luck.”

Spendthrift Farm went to $1.25 million to acquire a filly by Into Mischief out of Grade 1 winner Embellish the Lace, by Super Saver. She was consigned by Bluewater Sales, agent, and from the family of Grade 1 winners Afleet Express and Materiality and Grade 2 winners Eye of the Tiger and My Miss Sophia.

“She’s just a beautiful filly, obviously by the right sire out of a Grade 1 winner, great depth of family,” Spendthrift general manager Ned Toffey said. “She sort of ticked all the boxes, as classy a filly as we thought there was in the sale. We’re really excited to have her. Sometimes you see that pedigree and you’re disappointed in the physical, but there’s nothing disappointing in any way about this filly. You just hope that you’ll be able to afford her.”

Mayberry Farm spent $1.15 million for a colt by Quality Road who is from the family of Grade 1 winner Charlatan. Dixiana Farms consigned the colt, who is out of the English Channel mare Brielle’s Appeal. Brielle’s Appeal is a half-sister to Grade 2 winner Authenticity, dam of Charlatan and stakes winner Hanalei Moon.

“He’s been great. He’s been solid,” Dixiana owner Bill Shively said. “I like him a lot and the mare is named after my daughter Brielle. Brielle’s Appeal was a nice filly for us, a big strong filly, and this one came out right. What a way to start right?

“I’ve been doing this for 20 years and this is the first time we’ve broke a million, so we’re very happy with that. I expected him to be the best we had, but I didn’t expect him to get to a million.”

David Ingordo, who signed the ticket for the colt, began working with Dixiana when he was 21.

“I bought (this colt’s) second dam (Court of Appeal) for Dixiana in 2006 when she was carrying (eventual Grade 2 winner) Authenticity,” Ingordo said. “I have followed the family. Dixiana is one of the better breeders, and I don’t think they get the recognition that they should. I have probably seen this horse once a month since January. We have bought good horses from them. We knew he was a nice horse and the way the market it is, that is what it takes to buy one.”

Ingordo said the colt would go to trainer John Shirreffs in California.

West Bloodstock, agent for Repole Stable and St. Elias, purchased a colt from the first crop of Grade 1 winner City of Light for $1.05 million. Consigned by Woods Edge Farm, agent, he is a half-brother to Grade 3 winner Biddy Duke and from the family of champion Essential Quality. The colt’s dam is Ghostslayer, by Ghostzapper.

The City of Light colt was among the nine yearlings sold to West Bloodstock, agent for Repole Stable and St. Elias, for $5,185,000 to lead all buyers during the session.

A colt by War Front who is a full brother to European champion Air Force Blue sold for $1 million to Lynnhaven Racing. Consigned by Stone Farm, the colt is out of the Maria’s Mon mare Chatham.

“You come up here with a nice horse, but you’ve got to have the buyer there,” Stone Farm’s Director of Sales & Racing Lynn Hancock said. “People liked him on the sales grounds. He’s a beautiful physical – we think he’s one of the nicest that the mare has thrown. We’re heavily invested in the family and we love the family. The mare has been great to us. We’re really happy that some nice people ended up with him. Can’t be upset with a sale like that.”

Four horses that did not meet their reserve during Monday’s session went through the RNA Reoffer at the close of the second session, and one of those horses sold.

“The RNA Reoffer helped solidify confidence if someone did not get a horse sold (on Day 1),” Lacy said. “They had options. We had many entries but some got sold privately, so at the end of Monday, we had seven entries. Three of those sold privately earlier on Tuesday. We think the RNA Reoffer program worked.”