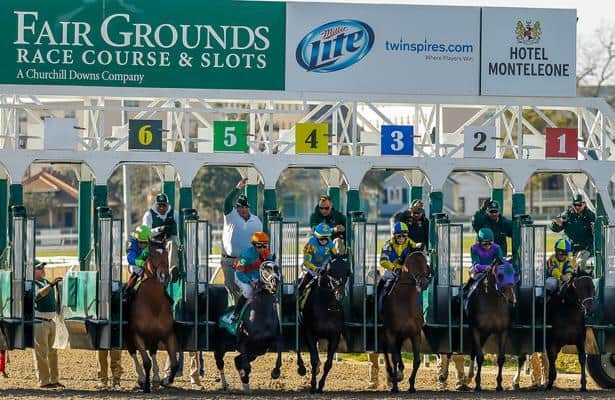 Eighteen-year-old apprentice jockey Erica ‘E. M.’ Murray is making her mark early during her first Fair Grounds Race Course & Slots meet. A native of Shreveport, Louisiana, she has 20 victories to her career so far from 149 mounts – all in 2015 – and is riding in her second meet.

“It feels pretty awesome,” Murray said. “I started in May and worked for (trainer) Joe Duhon for a full year before that. It can be intimidating at times to ride against such good jockeys, but I just remind myself that I’m here and just keep working horses so they have faith in me and reminding myself to have faith in myself.”

After galloping in the mornings all last Fair Grounds season, the competitive apprentice has shown a great deal of promise in the afternoons this season. Murray has five victories so far in her first major league meet, placing her in the top-10 through the meet’s third week in both wins and purses. Overall, she has hit the board with 15 mounts, resulting in a healthy 33% in-the-money.

“It feels so good to win for the people who have helped me so much,” Murray continued. “That’s the best part and the best feeling in the world. I have wonderful people like Joe supporting and pushing me and my agent Fred (Aime) who is really cool and keeps me relaxed. It’s a nice balance.”

Trainer Victor Arceneaux cannot help but be excited about his talented and honest sophomore Mobile Bay. The veteran conditioner has every reason to, since the dark bay son of Lone Star Special has won four stakes in 2015, including the Grade II $400,000 Super Derby three starts back in September. A durable type, the Louisiana-bred Tigertail Ranch homebred will take on his elders for the first time on Saturday in the $150,000 Twinspires.com Louisiana Champions Day Classic – his 13th start of 2015 and second in 18 days.

“He’s a really cool horse and he sleeps all the time,” Arceneaux beamed. “He is laid back and sound and is the type of horse where almost anyone can go into his stall and play with him.

“He’s training really well and came back good from his trip to Zia Park,” Arceneaux continued. “He never got off his feed, he feels good and (jockey) Edgar (Prado) fits him well. He’s matured as he’s gotten older. We’ll see how he does against older horses.”

On Nov. 25, the six-time winner from 12 starts was a game nose-victor in the $200,000 Zia Park Derby. That added-money win was at 1 1/16 miles and the fourth different distance at which the versatile colt has won a stakes. In June and July at Evangeline Downs, Mobile Bay won the $70,000 Lafayette Stakes and $100,000 Louisiana Legends Cheval Stakes at seven furlongs and one mile, respectively. Two races later, he won the Super Derby at Louisiana Downs at nine furlongs.

“One thing that I do really like is that the (Classic) is at a mile and an eighth,” Arceneaux concluded. “I like my horse and my chances.”

TOO DIM COULD CAP A BIG CHAMPIONS DAY FOR JOHNSTON

Veteran conditioner Eddie Johnston looks forward to what could be a big afternoon on Saturday’s Louisiana Champions Day card. The trainer is especially looking forward to seeing William Deckwa, Jr.’s Too Dim defend his title in the $100,000 Louisiana Champions Day Sprint, a race in which the son of Mutakddim overcame a horrid start to run down heavily favored Heitai to win by a neck at the wire last year. All in all, Too Dim is 6-for-10 over the New Orleans oval, while only finishing out of the money once.

Since the conclusion of the 2014-15 meet, things have not gone as well for the 6-year-old gelding. In three stakes starts against Louisiana-breds, he has hit the board once – a third-place finish in the $100,000 Louisiana Legends Sprint at Evangeline Downs on July 4 behind Heitai. Last out, he was fifth in the $100,000 Delta Gold Cup at Delta Downs on Nov. 14 going a mile – a trip slightly beyond his optimal.

On Saturday, he once again lines up against Heitai, who is the 8-5 morning-line favorite. The winners of the last two Sprints break from adjacent stalls one and two, with Too Dim drawing outside his rival.

“He’s doing great,” Johnston said. “What happened to us is we went up to run in the Gold Cup and they pushed it back, but he came out of the race great. I think he’s the same horse he was last year. He’s a very sound horse, he just has a problem with the heat and sweating and I think the Fair Grounds’ weather during this time of year helps him a lot.

“I am not sure Heitai is what he once was, so hopefully this will be a competitive race where we can beat him again,” Johnston continued. “There’s more than just these two, though. It’s an open race and we all got a chance. I think I have a real opportunity to beat some good horses like Heitai and String King in the ($100,000 Louisiana Champions Day) Turf, and I think Pacific Pink will be tough in the ($100,000 Louisiana Champions Day) Ladies.”

“I think Pacific Pink is doing really well and will be tough to beat,” Johnston analyzed. “Hopeful Notion has really turned around since he got here to the Fair Grounds. This is a good surface and it’s helped him with his feet and back-end issues. String King is a super horse and one of the best Louisiana-breds I’ve ever seen, but you never know. Hopefully they all run well.”

Two Alabama-bred stakes winners meet on Thursday in the card opener, the $57,000 Magic City Classic at one mile on the main track at Fair Grounds Race Course & Slots. Defending champ Buggin Out, owned by breeder Dennis Murphy, is the 1-5 morning-line favorite on the merits of a useful campaign that has seen him win two of nine in open allowance optional claiming company, including a seven-furlong event last out at Delta Downs on Nov. 21, earning a 92 Beyer Speed Figure. Buggin Out breaks from post three under Richard Eramia for trainer Kenneth Hargrave.

The only contestant in the Yellowhammer State-bred event who seems to have a chance against Buggin Out is 2014 $25,000 Kudzu Juvenile winner Ira, who is trained by Randy Nunley for Tracy Nunley and Jerry Hackett. The son of talented sprinter J Be K was second last out at Laurel Park in claiming company and has won three times at two turns since his Kudzu conquest.

Mizz Money, who won the $60,000 LaCombe Memorial at Fair Grounds and Grade III $100,000 Pucker Up Stakes at Arlington this season, worked a half-mile in 49.20 for trainer, breeder and part-owner Bernie Flint in what was her first breeze since finishing ninth and last in the Grade I $500,000 Queen Elizabeth II Challenge Cup at Keeneland on Oct. 10.

Windmill Manor Farm’s well-bred Werewolf, who impressed last out when taking a Keeneland turf allowance for trainer Andrew McKeever, got the bullet for five furlongs on Thursday morning when negotiating that distance in 1:00.20.

Blarp, who impressed with an easy win in first-level allowance company on Nov. 26 for trainer Joe Sharp, worked a half-mile in 48.80 for owners Robert Persons and Earl Conrad Sanderson, Jr., on Thursday morning.

Naveed Chowhan’s Jugni, a smart winner last season in allowance company and Grade II Fair Grounds Oaks alum, worked a bullet half-mile on Thursday in 47.40 for trainer Bernie Flint in what was her first recorded breeze since August.

Fox Hill Farm’s stakes-winning Exodus continues to work well over the track upon which he broke his maiden last January, working a bullet five furlongs in 1:00 flat on Wednesday morning for trainer Larry Jones.

Clark Brewster’s stakes-winning (as a juvenile) Bayerd, who has placed in five stakes in 2015 as a sophomore, worked a half-mile in 52.40 for trainer Steve Asmussen on Wednesday.

An unraced juvenile filly to watch is Susan Moulton’s Naylor, who looked as promising as her $370,000 price tag presumes when working a bullet half-mile in 47.80 on Monday morning. The Stonestreet Farm-bred daughter of Afleet Alex is trained by Wayne Catalano.

Stakes-placed Al Stall, Jr., trainee Harbour Island continues to look well while on the comeback trail for Spendthrift Farm, working five furlongs from the gate in 59.80 on Monday morning. The half-sister to Louisiana Derby winner Vicar’s In Trouble has not raced since finishing a game second in the Listed $100,000 Instant Racing Stakes.

Living Louisiana-bred legend Sunbean returned to the tab on Sunday, working an easy three furlongs in 38.80 for trainer Ron Faucheux and owner Brittlyn Stable. The multiple stakes-winning millionaire was last seen finishing third at 2-5 odds in the $200,000 Louisiana Premier Night Championship on Feb. 7.

Jorge Gomez’s Udoknowjack put the finishing touches on his preparation for Saturday’s $150,000 Louisiana Champions Day Classic with a half-mile move in a leisurely 51 flat on Sunday for his owner-trainer.

High-profile juvenile and half-brother to 2009 Horse of the Year Rachel Alexandra, Dolphus worked for the first time since his victorious debut on Nov. 22, negotiating a half-mile in 49.40 on Sunday for trainer Joe Sharp and owner Dede McGehee.