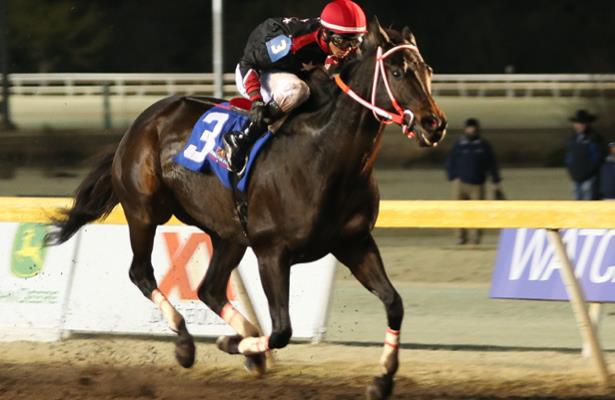 Photo: Dustin Orona Photography/Remington Park
If Shotgun Kowboy wins the $100,000 Jeffrey A. Hawk Memorial on closing day Sunday, he would become the first horse in Remington Park history to earn more than $1 million over the Oklahoma City racetrack.
The 7-year-old gelded son of Kodiak Kowboy, out of the Siphon mare Shotgun Jane, has earned $958,637 of his lifetime bankroll of $1,536,584 in races run at Remington Park. The morning line favorite at 5-2 odds, owned-bred-trained by C.R. Trout of Edmond, Okla., has his work cut for him. He will break from the outside post in a field of 12 going a mile and 70 yards.

Trout said he had some trouble with Shotgun Kowboy's hooves before returning to Remington Park for this meet. After treatment from a farrier, he has returned to the form that gained him millionaire status in his career.

Lifetime, Shotgun Kowboy has started 39 times, won 15, run second five times and third another seven times. At Remington Park, he has made 10 trips to the winner’s circle in 15 of his attempts. Leading rider David Cabrera will not be riding Sunday, so Shotgun Kowboy gets a rider change to Stewart Elliott. It will be his first time in this horse’s irons.
Last year, Shotgun Kowboy ran seventh in the Jeffrey A. Hawk.
Popularity, just to the inside of Shotgun Kowboy in post position 11, is the second choice at 3-1 odds. He has never run worse than second in four starts at Remington Park, winning two and running second twice. He ran a sharp second, beaten only a half-length in the $175,000 Governor’s Cup Stakes on Aug. 23 here and then was well-beaten in ninth for the $100,000 Remington Green on the turf, Sept. 29. Luis Quinonez is in the saddle for trainer Joe Offolter and owner Bryan Hawk of Shawnee, Okla. Popularity, a 5-year-old son of Distorted Humor, out of the Kris S. mare Sweet Lips, has raced 11 times, winning four and running second three other times. He has a bankroll of $148,839.
Third choice in the morning line is Sleepy Eyes Todd, the only 3-year-old in the field of 12. This colt by Paddy O’Prado, out of the Wild Rush mare Pledge Mom, has a chance at the upset after showing his prowess in the Grade 3, $400,000 Oklahoma Derby on Sept. 29. He was beaten by 1 3/4 lengths by Owendale in that spot. Sleepy Eyes Todd is owned by David Cobb of Scottsdale, Ariz., and trained by Miguel Silva.
Shotgun Kowboy is not the only millionaire in the field, either. The wily 5-year-old veteran Lookin at Lee, the runner-up in the 2017 Kentucky Derby to Always Dreaming, is in this race at 15-1 odds on the morning line. His owner is L and N Racing of Tulsa, Okla., the same outfit that owns Rowdy Yates, one of the favorites in Sunday’s $400,000 Springboard Mile. Trainer Steve Asmussen is looking for lightning in a bottle with this one, trying Lookin at Lee in this spot with blinkers off. Jockey Brian Hernandez, Jr., gets the call.

The last time Lookin at Lee ran without blinkers was as a 2-year-old and he ran a fast-closing second to Classic Empire in the Grade 1, $500,000 Breeders’ Futurity at Keeneland in Kentucky, Oct. 8, 2016. Classic Empire went on to win the Grade 1, $2 million Breeders’ Cup Juvenile and was named Champion 2-year-old male. Lookin at Lee’s lifetime earnings are $1,333,195 from four wins in 28 starts with six seconds and three thirds.