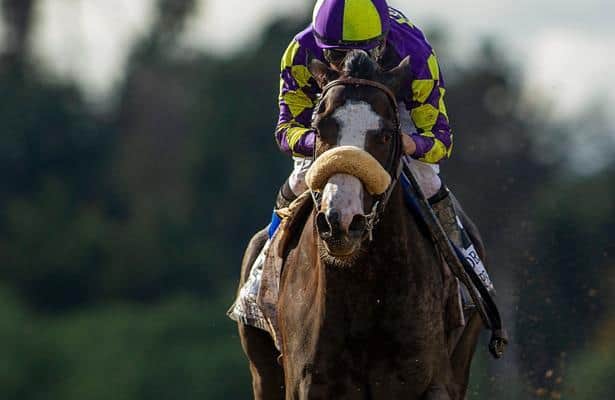 John Shirreffs really does not have time to languish in the disappointment of the career-ending injury to Honor A. P.

Not when he is spending this week at sales that could bring the next star to his California barn.

Part of being a trainer is being at horse sales such as this week’s in Lexington, Ky., where Shirreffs took a call to discuss Monday’s announcement that Honor A. P. had suffered a minor injury in the Kentucky Derby and was immediately retired to stud.

“It’s a shame,” he said. “He strained his left front tendon. We suspected it after the race. Then we scanned it and confirmed it when he got back to California.”

Although it was a relatively minor injury, it was going to keep Honor A. P. from being considered for next month’s Preakness and the following month’s Breeders’ Cup Classic. So the retirement decision was made by Lee and Susan Searing and subsequently announced this week by Lane’s End, the Kentucky breeding farm where the Honor Code colt will stand.

In its news release, Lane’s End emphasized Honor A. P.’s Beyer Speed Figure of 99 in the Derby and that he went “an incredible 49 more feet than the winner Authentic. This in turn means that the colt ran the fastest race of the field when accounting for ground loss.”

“It was a shame that (Ny Traffic) came out and sort of hindered his getting away from the gate,” Shirreffs said. “When he got out of the gate in his last two races, the horses next to him interfered with him.”

Before the losses in last month’s Shared Belief Stakes at Del Mar and then the Derby, Honor A. P. turned in bravura performance in early June. Coming off a three-month break tied to pandemic complications, he ran away to a 2 3/4-length victory in the Grade 1 Santa Anita Derby. His closest but clearly defeated pursuer was Authentic.

“He had tremendous potential,” Shirreffs said. “It’s disappointing, for sure. But he’s onto a new career. Let’s hope he has a great legacy.”

Honor A. P. earned $150,000 in the Derby to bring his career total to $532,200 from six races that included two wins and three seconds. The Searings paid $850,000 for him two years ago at the Fasig-Tipton Saratoga New York Select Yearling Sale. That was the most ever paid for an Honor Code yearling, according to Lane’s End, which did not disclose the terms of its deal with the Searings. It also said that Honor A. P.’s stud fee has not been set.

“We are excited to stay involved in his next career as a stallion,” Lee Searing said in the Lane’s End statement.

Honor A. P. was the fifth Derby horse for Shirreffs. The fourth-place finish was the best for Shirreffs since his first trip in 2005, when he won with 50-1 long shot Giacomo.

Now 75, Shirreffs is not marinating in memories. Not when he is looking at yearlings in Kentucky while he has a stable to maintain in smoky Southern California.

Honor A. P. John A. Shirreffs

Saturday plays: Focus on stakes from Churchill Downs, Woodbine
With the Breeders’ Cup at Del Mar in November loom...

Division Rankings: Letruska is in hunt for Horse of the Year
One of the more highly profiled horses in these ra...
x close