Shirreffs, Moss have a new 50-1 shot for the Kentucky Derby 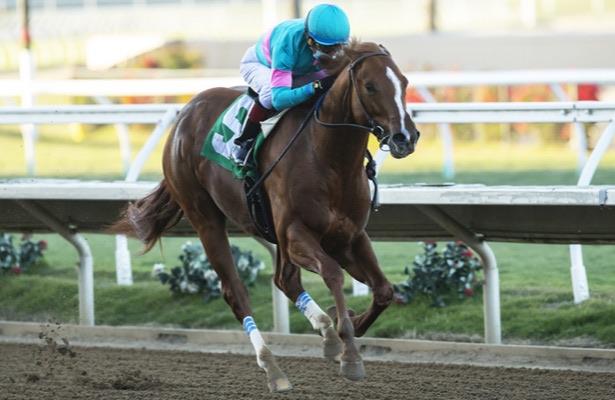 John Shirreffs and Jerry Moss are familiar with having a 50-1 long shot for the Kentucky Derby. But maybe not 5 1/2 months beforehand.

The trainer and owner who won at those long, post-time odds 15 years ago with Giacomo find themselves with a new contender carrying the same price in a much deeper market.

With his 7 1/4-length victory Sunday in the seven-furlong Bob Hope Stakes (G3) at Del Mar, Red Flag leaped into the Derby futures at William Hill Nevada. Opening at 50-1, he shares the fifth-shortest odds among the 130 horses listed.

“He’s not a brilliant work horse, so this was a pleasant surprise,” said Shirreffs, who also trained Hall of Fame mare Zenyatta for Moss. “You always hope, but you never know.”

Red Flag was one of five horses to open Sunday night in the Derby futures at William Hill. The others are:

• Caddo River (75-1). After finishing second in his first two races, both at seven furlongs, trainer Brad Cox stretched him to a one-turn mile Sunday at Churchill Downs. That is where jockey Florent Géroux led the whole way in riding the odds-on favorite to a 9 1/2-length win. The Hard Spun colt is another 2-year-old in Cox’s stable, which includes Breeders’ Cup Juvenile winner Essential Quality, 100-1 Derby hopeful Swill and, well, scroll down.

• Santa Cruiser (90-1). The Calumet Farm homebred, who was third in his debut at six furlongs and then second at seven, graduated to his own front-running, one-turn mile victory Sunday at Churchill Downs. The Dialed In ridgling trained by Keith Desormeaux got the better of a race-long duel with the favorite Regular Guy and won by 1 1/2 lengths.

• Gagetown (120-1). Cox added another winner to his juvenile roster when this Exaggerator colt finished first Friday at Churchill Downs in his debut. Carrying odds of 5-1 into the six-furlong maiden race, he closed from fourth and pulled away by two lengths.

• Uno (120-1). Making his first start in the Aqueduct mud Thursday, this son of Laoban gave up at least a length of ground in a bumpy break. But with José Ortiz’s urging, he still fought his way to a 3 3/4-length win against four other maidens in the six-furlong race. Todd Pletcher trains Uno for Bill and Terry Mathis, who bought the colt four months ago for $255,000.

Essential Quality remains William Hill’s 8-1 favorite to win the Derby. No other horse is priced shorter than 40-1. The full list is shown below. (Where there were changes, the old odds are in parentheses.)