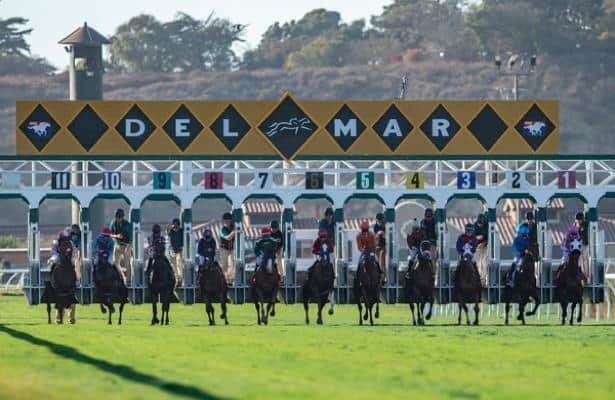 The first of the two Grade 1 races slated for closing weekend at Del Mar has attracted a number of out-of-town shippers from some of the most successful barns in horse racing. The Grade 1, $400,000 Hollywood Derby is scheduled for Saturday and a field of 11 horses has entered the 1 1/8 mile turf event.

Todd Pletcher, Graham Motion, and Shug McGaughey have sent horses from their east coast bases for the final major ‘Derby’ of 2022.

Pletcher will start Wit, a 3-year-old son of Practical Joke, owned in part by Mike Repole, a leading owner in New York. The colt won the Bay Shore (G3) at Aqueduct in April followed by a rough fourth-place finish behind Jack Christopher in the Woody Stephens (G1) on the Belmont Stakes undercard. Wit finished second in the Hall of Fame (G2) and won the $135,000 Better Talk Now, both at Saratoga this summer, before missing by a neck to Balnikhov in the Bryan Station (G3) at Keeneland.

“It’s a grade one so you travel wherever you need to travel for a grade one,” assistant trainer Emily Green said of the decision to ship Wit to the West Coast. “He’s always a hard trying horse. He gives his all every time. He’s easy going, he’ll do whatever you want him to do.”

“He came over here with a lot of energy,” she says. “We walked him the first day and then he started his training. High energy, he couldn’t be doing much better.”

Trainer Shug McGaughey shipped Celestial City, a 3-year-old son of Uncle Mo, to the Hollywood Derby. He’s won two in a row including the Hill Prince (G2) at the Belmont at Aqueduct meet last month. Prior to that, Celestial City won an entry level allowance. This summer at Saratoga, the colt ran third in the Hall of Fame (G2) and second to Annapolis in the Saranac (G3).

“It’s pretty good spot for him,” McGaughey said. “He wants to run a distance of ground. It’s the last chance for a grade one for straight 3-year-olds and he’s doing pretty good right now so we’re taking a chance.”

“His races have been pretty consistent all year,” he says. “He’s run against some pretty good horses, like Annapolis. He came back in the Hill Prince and Jose (Lezcano) let him find his way and he finished up really strong. Hopefully that will be the same scenario this time.”

Graham Motion has been running horses at Del Mar throughout the Bing Crosby meet and will start three in the Hollywood Derby including Script, who missed by a nose in the $75,000 Let It Ride Stakes on opening weekend. The colt came with an impressive turn of foot down the lane but got the worst of the head bob.

His stablemate, Speaking Scout, will also run in the Derby. The son of Mr. Speaker won the $100,000 Hawthorne Derby in Chicago last month by five lengths. He then ran second to Cabo Spirit in the G2 Twilight Derby at Santa Anita.

“He stayed out here from when he ran at Santa Anita,” Clapham says. “He shipped down here and breezed on the turf course last week and hopefully he’ll run a big race, too.”

The third Graham Motion entry is Evan Harlan, who broke his maiden at Belmont at Aqueduct last out.

The local contingent in the Hollywood Derby is a formidable one led by the George Papaprodromou-trained Cabo Spirit, now a multiple graded stakes winner. In addition to winning the Twilight Derby, he also won the La Jolla (G3) at Del Mar this summer.

There’s also Spycatcher from the Mark Glatt barn; the Ron Ellis-trained War at Sea; and Handy Dandy, winner of the Let It Ride.

The Hollywood Derby dates back to 1976 and was run every year at Hollywood Park until the track closed in 2013. The first year it was run at Del Mar in 2014 it was won by California Chrome. It’s the ninth and final race of the stakes packed Saturday card at Del Mar. First post is at 12:30 p.m. PST (3:30 EST).