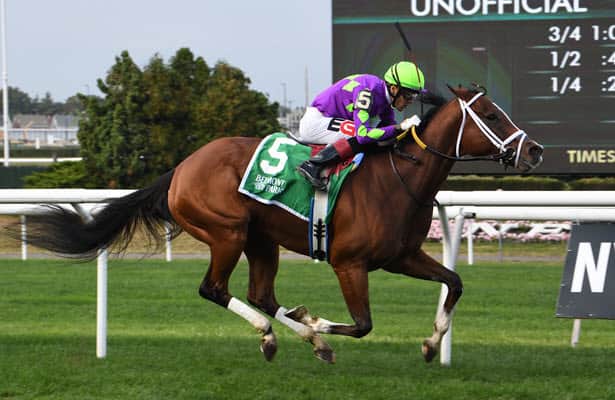 The one-mile Suwannee River for fillies and mares 3 and up is among five stakes, four graded, worth $650,000 in purses on an 11-race program. It is one of two scheduled for the Gulfstream turf course along with the $200,000 Fort Lauderdale (G2), a prep for the $1 million Pegasus World Cup Turf Invitational (G1).

Shifty She became a graded-stakes winner in her most recent start, a front-running 1 1/2-length triumph in the one-mile Noble Damsel (G3) Oct. 23 at Belmont Park. It followed a summer and fall away from her South Florida home that included a third in the Aug. 8 De La Rose at Saratoga and fourth in the Sept. 11 Ladies Turf (G3) at Kentucky Downs, beaten 1 3/4 lengths each time.

“She knocked heads at Saratoga, and it was a good run. She looked like a winner and got a little tired. At Kentucky Downs it was the same thing, and then she obviously capped it off at Belmont,” Joseph said. “She’d been holding good company before that, and obviously that was a breakthrough race. She got a Grade 3 win under her belt, which is huge for her career after racing. It was important to get that and, hopefully, she can continue to build on that going forward.”

There was consideration given to training Shifty She up to the Pegasus program, scheduled this year for Jan. 29, but the Suwannee River gives the 5-year-old Gone Astray mare six weeks to the 1 1/16-mile Filly & Mare Turf and comes at a distance where she is 3-for-6 lifetime.

Unraced at 2, Shifty She ran fourth in her career debut then rattled off three consecutive victories before going to the sidelines in December 2019. She didn’t race again for 489 days until April 9 at Gulfstream with Joseph as her new trainer, setting the pace before settling for fourth – 1 1/2 lengths behind stakes winner Kelsey’s Cross – in a one-mile optional claiming allowance.

“She came to us and she was already proven,” Joseph said. “Her first race for us she dueled the whole way and she still ran fourth. She should have run last that day, as fast as they went on the grass. After the race I told the owner, ‘I feel bad for the horse because she literally did not want to get beat off that kind of layoff.’ She still tried her heart out and didn’t get beat far. After that race I realized we had a really good horse on our hands as far as what she showed that day.”

Shifty She is part of Joseph’s string at Palm Meadows, Gulfstream’s satellite training facility in Palm Beach County, where she has breezed three times since her last race. This will be her first race since mid-June at Gulfstream, where she is 4-for-6 lifetime including back-to-back stakes wins in the Powder Break and 1 1/16-mile Ginger Punch this spring and summer.

“She loves it here,” Joseph said. “We knew we had a nice filly, but she just kept getting better and better. When we took her to Saratoga and she ran against those horses, then you knew that you had a filly that you could at least win a graded stake with. She keeps improving, and one thing about her is she always tries. She tries her best every time she runs. You can’t teach that. Some horses have it and some don’t. It’s what separates the good ones from lesser company.”

Edwin Gonzalez is named to ride Shifty She back from Post 3 in a field of 12 at topweight of 125 pounds.

Sanford Bacon and Patrick Biancone Racing’s Kelsey’s Cross will be seeking her first win in five starts since beating Shifty She in April. The 5-year-old mare, trained by Biancone, ran third in the 2019 Wonder Again (G3) at Belmont as a 2-year-old, won the 2020 Ginger Punch and ran third in the Hillsborough (G2) as a 3-year-old, and has placed in five other stakes. Sixth in a one-mile handicap Nov. 27 at Gulfstream, her only dirt start in 23 career races, she ran fifth in last year’s Suwannee River behind multiple Grade 1 winner Starship Jubilee.

Other graded winners in the field are Alms, Keeper of Time and Sweet Melania. Godolphin’s Alms, a homebred daughter of City Zip, won her first four career races including the six-furlong Matron (G3) at Belmont and one-mile Jimmy Durante (G3) at Del Mar in 2019 to cap her juvenile campaign. She is winless in her last four, spread out from February 2020 to Nov. 25 at Fair Grounds, where she was beaten a neck when second in the Joseph R. Peluso Memorial. During that time she also ran third by a head in the July 2020 Appalachian (G2), which preceded a 15-month layoff.

Robert and Lawana Low’s Sweet Melania is also looking to regain her winning form. Trained by Hall of Famer Todd Pletcher, the 4-year-old daughter of 2015 Triple Crown champion American Pharoah won the 2019 Jessamine at 2 and the 2020 Wonder Again (G3) at 3 but has failed to find the winner’s circle in seven subsequent tries. Most recently she ran second by less than a length in a 1 1/16-mile allowance Oct. 15 at Keeneland.

Bradley Thoroughbreds, Gary Finder, Tim Cambron and Anna Cambron’s Keeper of Time is a bay filly seeking her first North American victory in her fourth start since coming to the U.S. following a victory in the One Thousand Guineas Trial (G3) in April at Leopardstown in her native Ireland.

“She beat a couple of really nice fillies. I think there were two future Grade 1 winners in the race, so she’s got pretty good form,” trainer Brendan Walsh said. “I like the way she ran last time at Belmont. She fits pretty good with the fillies here, so I’ll be looking for a good run from her. We’ll see how she takes to Gulfstream.”

Keeper of Time was third by three lengths in her U.S. debut, one-mile Riskaverse Aug. 26 at Saratoga. Following a puzzling effort in the Sept. 19 Pebbles, also at a mile, she returned to Belmont for the seven-furlong Glen Cove Oct. 15, closing from far back to run third, beaten 1 1/2 lengths.

“She ran really well at Saratoga. It was a little disappointing her first run after that at Belmont. It was just a non-race, really. In her last start, she was very good again,” Walsh said. “This is a step up taking on older fillies … but she won a nice stake at Leopardstown in the spring and she’s got plenty of talent and she’s been working good, as well. Given the right trip, I can’t see her being too far away.”

Tyler Gaffalione has the call on Keeper of Time from Post 4 at a low of 118 pounds.

Multiple stakes winners Classy Lady and Summering; La Babia, winner of the Sept. 25 George Rosenberger Memorial at Delaware Park in her most recent start; Dawn’s Dancer, a last out allowance winner Oct. 24 at Keeneland; In a Hurry, fourth in the Noble Damsel; Princess Causeway and Quiet Company complete the field.