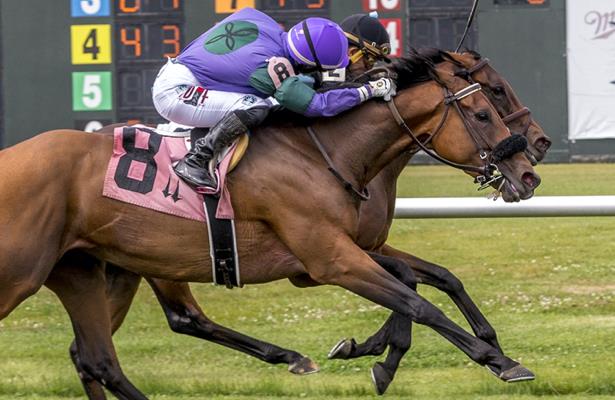 From a five-wide battle inside the final furlong of Saturday’s $100,000 Tom Benson Memorial Stakes, the Chad Brown shipper Altea emerged on the inside with the local stakes winner She’sonthewarpath outside.

In a decision too close to call at first glance, the nod went to She’sonthewarpath, a Steve Margolis trainee who backed up a victory in the Al Stall Memorial back on Feb. 15 over the same course and distance — and by the narrowest of margins.

The photo showed Chantal Sutherland’s mount getting her nose just up in 1:42.23 for owners Robert and Lawana Low.

"When I asked her to gun it," Sutherland said, "she gunned it."

Stewards also looked closely at Altea’s stretch run and determined no change was needed after Joel Rosario came out when full of horse. Any interference was ruled to have not changed the race’s outcome.

"Joel must have got through on the fence somewhere," Sutherland said. "(She'sonthewarpath) didn't see him, so she started to relax. I pointed her head and was, like, screaming, 'She's right there!'

"I honestly didn't know who won in the end. Warpath, she's just a star."

Notapradaprice ran third with Winning Envelope fourth in a field of 11 older fillies and mares.

They all rallied behind loose leader Fullness of Life, a 40-1 longshot who cut opening fractions of 23.54, 48.44 and 1:12.24 over firm turf. That filly began to tire in the stretch, and it was anybody’s race before the top two emerged from the pack in the final strides.

She’sonthewarpath, a daughter of Declaration of War, struck at 7-2 to improve her record to 5-1-2 in 11 career starts.

"The filly just lays it on the line," the trainer Margolis said. "She's got that grit about her."