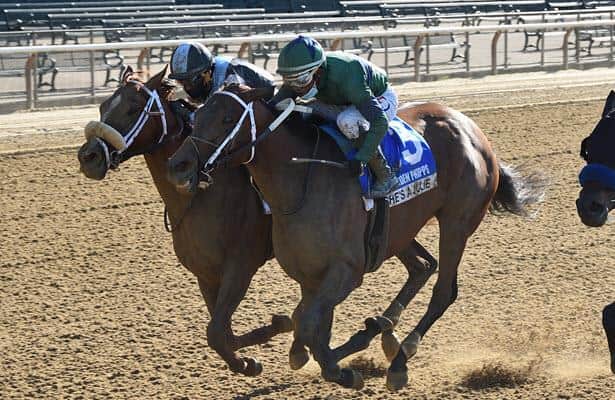 She's a Julie, the longest shot on the board, rallied in deep stretch to pull off a 14-1 shocker in the $300,000 Ogden Phipps Stakes (G1) at Belmont Park Saturday.

"Today she was feeling good,” Santana said of She's a Julie immediately after the race. “We got a great break. I sat in the spot I wanted to. She gave me a nice kick in the end. She ran her race today."

Castellano acknowledged it was a "tough" being on the wrong side of the photo, but was proud of the effort from Point of Honor, who was exiting a third behind Ce Ce and Ollie's Candy in the April 18 Apple Blossom (G1) at Oaklawn Park.

"It was a tough beat. I'm not disappointed at all," Castellano said. "She ran her race. I expected a hot pace and she did everything she could. It was a 'bob' and these are all competitive horses.

Trained by Steve Asmussen, She's a Julie completed 1 1/16 miles on a fast track in 1:40.27 and paid $31.40 to win. Asmussen also won last year's Ogden Phipps with Midnight Bisou, who would go on to win the Eclipse Award as champion female older horse.

As a Breeders' Cup Challenge "Win & You're In" race, She's a Julie will receive an all-expenses paid trip to the Nov. 7 Breeders' Cup Distaff at Keeneland.

#3 She’s a Julie wins a thrilling edition of the Ogden Phipps (G1) with @RSantana_Jr up for Steve Asmussen pic.twitter.com/ZVz1EGsqWN

Asmussen was not on hand at Belmont on Saturday. Assistant Tom Sheets, who oversees Asmussen's New York division, noted he wasn't sure who had won in real time.

"I had to watch it one more time to be sure [she had won.] It was very close," Sheets said. "I said to Ricardo before the race that there was a lot of pace in there, and that's how the race unfolded. It was a very patient ride and the pace upfront helped. She ran super."