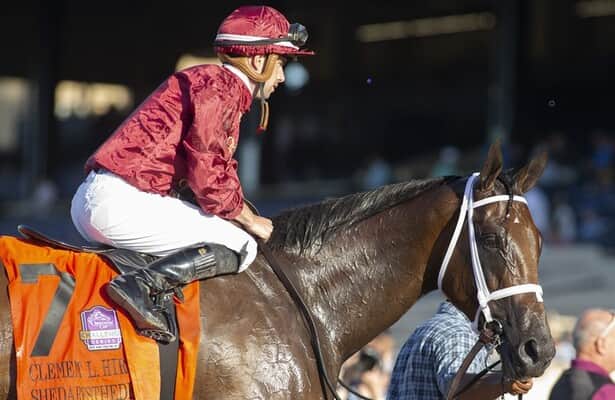 She did not have to deal with Letruska on Sunday. So Shedaresthedevil found herself all alone at the end of the Grade 1, $300,000 Clement L. Hirsch Stakes on Sunday at Del Mar.

Sent off as the favorite for Eclipse Award-winning trainer Brad Cox with Florent Géroux riding, Shedaresthedevil (6-5) extended her narrow lead with an eighth of a mile to go and won by 3 1/4 lengths in the $300,000 race for fillies and mares, automatically qualifying her for the Breeders’ Cup Distaff on the same track Nov. 6.

“Very happy with her performance,” Cox said in a text to Horse Racing Nation from Saratoga, where he saddled Essential Quality's victory Saturday in the Jim Dandy (G2).

It helped make some amends for Shedaresthedevil’s third-place finish to Letruska and stablemate Bonny South in the Ogden Phipps (G1) in her most recent start June 5 on the Belmont Stakes undercard.

Pacesetter Venetian Harbor (2-1) ended up second behind the 2019 Kentucky Oaks winner. Paige Anne (27-1) was third. As Time Goes By (3-2) could not overcome a poor start and was fourth, finishing only ahead of Cover Version (48-1).

“The idea was to get her to break alertly, then get a good spot," Géroux said. "That’s exactly what happened."

“We sat right off the lead, nice, calm and relaxed,” traveling assistant trainer Eric Gary said. “When it was time to go, she showed up like she was supposed to.

The third Grade 1 victory for Shedaresthedevil, a 4-year-old filly by Daredevil, took her earnings to $2,047,318 for Flurry Racing, Qatar Racing and Big Aut Farms. Her career record is 15: 8-2-4.

“I’d have to say she’s up there with the best mares I’ve ever ridden,” Géroux said. “The fact that she showed she can run well on the track where the Breeders’ Cup will be held, that’s a good thing, too.”

“She flies back (Monday) to Kentucky,” Gary said. “Then I guess she’ll be back in November.”