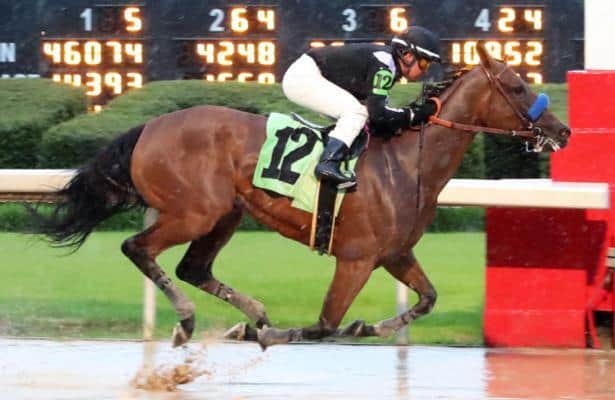 It wasn’t a major Kentucky Derby prep, but Merneith added to her famous daddy's resume last Sunday at Oaklawn when the 3-year-old filly broke her maiden by 10 ¼ lengths in the 10th race.

“That filly, I love her,” the Southern California-based Baffert said this week. “She’s such a good filly and she looks the part. She looks like Pharoah. These Pharoahs, you have to wait on them and they’re going to come running.

"A lot of them, they tried to run them early. I thought she was going to do that first out. Every time I worked her, I would tell people I cannot believe she’s a maiden. I don’t know what it was.”

Merneith, as the favorite, had finished second in first two career starts, both earlier this year at Santa Anita. She was beaten a length in her Jan. 20 debut at 6 ½ furlongs and a nose Feb. 23 going a mile.

Cutting back to 6 furlongs and racing over a sloppy track for the first time Sunday, Merneith sat just off the pace before taking command on the outside turning for home. Merneith completed the distance in 1:09.96 and paid $3.60 as the heavy favorite. She also received a preliminary Beyer Speed Figure of 91, a career high.

American Pharoah began his 2015 Horse of the Year campaign by winning Oaklawn’s Rebel Stakes (G2) by 6 ¼ lengths and the Arkansas Derby (G1) by eight lengths before sweeping the Triple Crown. The Rebel was also run on a sloppy track.

“I think Martin, when he broke the other day, he just let her settle,” Baffert said of Mernieth. “Before, they were just sending her hard and she didn’t want to do that. She’s a really good filly, so I’m glad that she did that because she’s got a great owner.”

Merneith, a $600,000 Ocala Breeders’ Sales’ March 2-Year-Olds in Training Sale purchase, is campaigned by HRH Prince Sultan Bin Mishal Al Saud and among roughly a half-dozen horses on the grounds for Baffert, who has been sending select runners to Arkansas after racing was suspended late last month at Santa Anita Park. Baffert’s Oaklawn string is overseen by his traveling assistant, Jimmy Barnes, who sent Merneith out after a local half-mile bullet workout in 46.80 seconds under Garcia.

“There’s not a bigger Pharoah fan than me,” Baffert said. “When I see one, I’m going to buy them. The only one that got away was that filly for $8 million (America’s Joy). She was beautiful, Beholder’s sister. They have a certain look. If they have that look, they can really run. You’ve just got to let them develop.”

Baffert said a major long-range target for Merneith is the rescheduled Kentucky Oaks – the nation’s biggest prize for 3-year-old fillies – scheduled for Sept. 4 at Churchill Downs. The 1 1/8-mile race, originally set for May 1, was moved because of the COVID-19 pandemic.

Retired in 2015 after winning 9 of 11 career starts, American Pharoah stands at Ashford Stud in Kentucky for an undisclosed fee. Merneith is the second foal out of Flattermewithroses to reach the races and win.

Merneith ran Baffert’s record at the meet to 5-for-9 and was his 442nd career victory with Garcia, once the trainer’s go-to afternoon and breeze rider in Southern California. Garcia is riding regularly at Oaklawn for the first time this year after relocating to the Midwest last fall. Garcia rode American Pharoah in his career debut.