'She just has to run her race,' DeVaux looking to test Bayerness 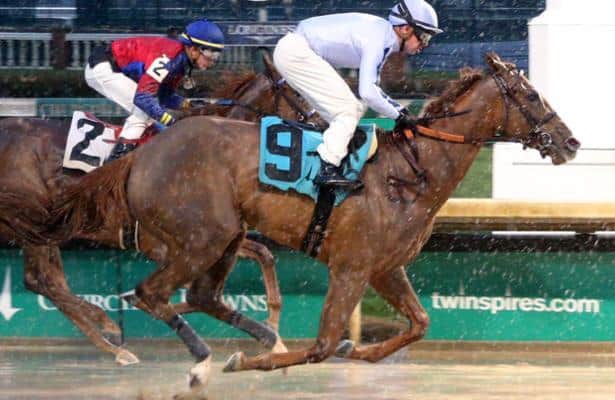 When Bayerness took to the track at Churchill Downs in June for the Grade 3 Dogwood Stakes, she was looking to bounce back. The daughter of Bayern had finished seventh in the Davona Dale (G2) at Gulfstream, and had something to prove.

With a third place finish, she succeeded in rebounding, and put herself on the Kentucky Oaks points board with four points. Now she’s entered in Saturday’s Indiana Oaks (G3) at Indiana Grand, where trainer Cherie DeVaux said she’ll be looking to test the filly’s endurance.

“We have to stretch her out,” Devaux said. “It’s a mile and sixteenth, so we just want to see after her last race if we can stretch her back out around two turns and see if she’s going to be effective, which will open a lot of doors for her in that division.”

DeVaux said she was optimistic about Bayerness’s chances in the race, saying she had been training well recently and had got a lot out of her run in the Dogwood.

“She just has to run her race,” DeVaux said. “She’s very easy to ride so she can put herself wherever she needs to, she’s pretty kind and straightforward. She just needs to come with her A-game.”

DeVaux also said the goals for Bayerness had changed after each of her last two races, so the Indiana will be telling for her future plans, though the ultimate goal will continue to be qualifying for September’s Kentucky Oaks.

Elsewhere in her barn, DeVaux offered up some of her future plans for Reagan’s Edge, who finished second on Saturday in the Victory Ride (G3) at Belmont Park.

“We’re gonna keep the Test on the table,” DeVaux said. “But she’d really have to train like she belongs in it. Not sure if she can handle the extra distance, it’s only half of a furlong, but I was really impressed with how she did in six and a half.”

Also on the table for the daughter of Competitive Edge is the Prioress, at the same meet as the Test at Saratoga.

DeVaux has recently been training better and better horses, including both Reagan’s Edge and Bayerness. She gave a preview of some that she is looking forward to running down the line.

One such filly is Remanded, a daughter of Elusive Quality, who broke her maiden in February at Gulfstream Park.

“She has the quality to be stakes,” DeVaux said. “She put in just an OK effort at Churchill in her last start, but the track was playing a little bit not to her liking. It was deep and she ended up on the lead, so I’m looking forward to seeing how she progresses.”

In the Appalachian Stakes (G3) on Saturday, another filly in DeVaux’s care, Mariafoot, from France, will be making her American Stakes debut.

“I’m excited to see how she performs on Saturday,” DeVaux said. “She has the ability to, in her division, the 3-year old turf [fillies], to really be a top contender.”