She Be Wild tops Forward Gal 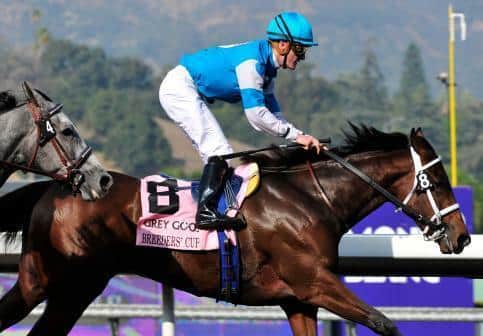 Jockey Julien Leparoux was aboard She Be Wild for the first time in the Breeders’ Cup and retains the mount as the daughter of freshman sire Offlee Wild makes her first ever start on dirt after four victories and a second in as many starts as a 2-year-old on synthetic surfaces at Arlington Park, Keeneland and Santa Anita. She breaks from post position six.

Remarkably, the widely expected presence of She Be Wild in the field for the Forward Gal obviously did not deter others with promising 3-year-old filly prospects, as she faces 12 rivals including Starlight Partners’ Ailalea, winner of the Tempted Stakes (G3) Aqueduct; and Richard Ravin’s undefeated Richiegirlgonewild, winner of the six-furlong Old Hat Stakes (G3) over the track here on Jan. 9.

Jockey Edgar Prado rides Ailalea for trainer Todd Pletcher as she makes her first start since drawing off to win the one-mile Tempted at Aqueduct by 1 ¼ lengths on Nov. 7. The $340,000 Keeneland September yearling by Pulpit broke her maiden by four lengths going a mile at Belmont Park in her previous start after two good tries in sprints, and her stretch-running style may serve her well in Sunday’s field.

Regular rider Tim Thornton will be back aboard Richiegirlgonewild, who has won all three of her career starts for trainer Larry Rivelli. The daughter of Wildcat Heir won her debut going two furlongs at Arlington Park on May 2 and didn’t run again until winning a 4 ½-furlong allowance at Charles Town in mid-November. She went wire-to-wire winning the Old Hat by a length over several rivals she faces again Sunday.

Another solid contender in the race will be Powerohm Stable’s Sister Resistor with Kent Desormeaux aboard for trainer Ken McPeek. The daughter of Jump Start won her debut by four lengths at Ellis Park in July and rallied from last of 11 to finish third behind She Be Wild in the Top Flight Stakes at Arlington Park in August. In her only start since then, Sister Resistor won a one-mile allowance race here by 2 ½ lengths on Jan. 6.