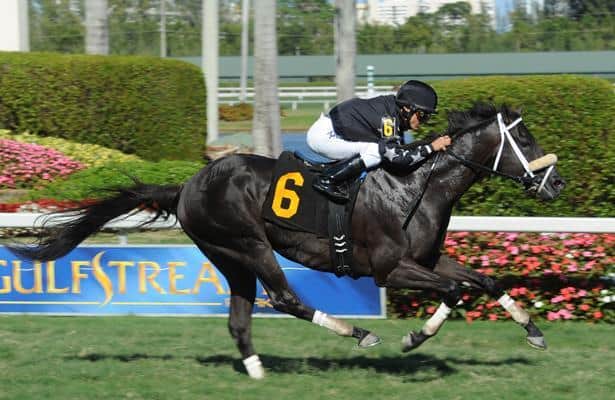 Silver Moon Racing’s Shatak will make his graded stakes debut in Saturday’s $100,000 Miami Mile (G3) as the field’s most lightly raced starter, but while the 5-year-old might be short on races, he’s not short on wins at Gulfstream Park.

The George Weaver trainee, who has started just eight times in three seasons of racing, has won three of four starts over the Gulfstream Park lawn, the lone loss coming in a 7 ½-furlong allowance in January of 2014, when he rallied from off the pace to get up for third, beaten just ¾-length and gaining at the wire. Shatak has never lost when going a flat mile in Hallandale, and he’s currently on a local two-race win streak, having captured two consecutive allowances, one in December and another more recently on April 3, in which he professionally drew off by 1 ½ lengths.

“He came out of [his last race] well,” Weaver said. “He was pretty happy with himself. He was acting like he knew that he won. We’ve been happy with the way he’s been training, and we’re excited to try to take on some tougher horses over a track that he clearly is very fond of.”

After waiting more than three months to find an appropriate spot for his runner, Weaver said Shatak is ready to go again off three-weeks rest. The Louisville, KY native, who also has a permanent residence in South Florida, said the manner in which the Kentucky-bred won his last start showed him that he was ready to take the next step up to stakes company.

“Both his races at Gulfstream – the one back in December and this recent one earlier in April – were really powerful races,” Weaver said.“In his last race, I thought he kicked away very nicely, and he ran a fast time (1 mile in 1:33.47). I think that even that kind of performance could put him in the ballpark in this race, and if he improves a little bit, he might win it.”

Shatak will be ridden by Eddie Castro and will break from post four in the Miami Mile, which is slated to be the ninth race on an 11-race card Saturday at Gulfstream. The race will be included in the day’s Rainbow 6 sequence, and if the popular multi-race wager is not hit Thursday or Friday, a mandatory payout will be offered, resulting in a jackpot that could reach upwards of $5 million.