Sharp has one more step on the recovery from brain surgery 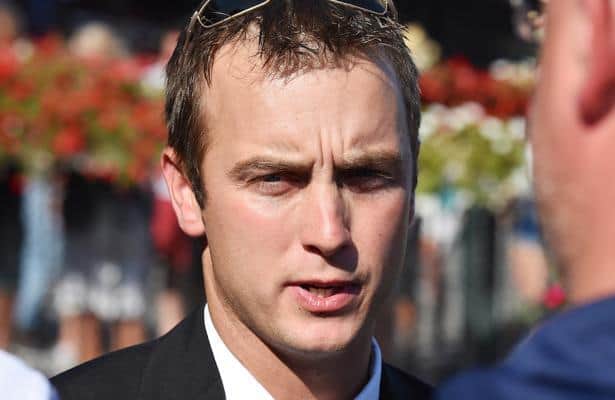 Trainer Joe Sharp has encountered a setback in his recovery from extensive surgery to remove a benign brain tumor. He said he is scheduled to undergo an additional operation Wednesday at M.D. Anderson Cancer Center in Houston to resolve the issue.

Surgeons at M.D. Anderson required 10 hours to remove what is known as an acoustic neuroma in early June. Sharp, 35, had hoped to address the problem earlier this year, but the pandemic forced a delay.

According to Sharp, Wednesday’s operation will be done to repair what amounts to a tear in the skin of the brain that apparently was caused by exertion. Although it is expected to take three hours, he described it as “harmless.” He expects to return to the barn fairly quickly to oversee a stable of about 60 horses, the vast majority of them based at Churchill Downs’ Trackside Training Center.

The native of Martinsburg, W.Va., is a former jockey. He took out his trainer’s license in 2014, three years after he married Rosie Napravnik, one of the finest female riders of all time, who retired while in her prime to start a family and assist her husband in building his career. They have three children.

Sharp began experiencing issues with dizziness and balance last year. He initially was diagnosed with vertigo. He sought a second opinion at the urging of Richard DePass, a retired jockey’s agent and family friend. Tests revealed the tumor and then showed that it was not malignant.

Sharp lost the hearing in his right ear. He continues to have moderate problems with balance. “I’ll never have perfect balance again,” he said.

Through it all, he continues to handle everything with remarkable calm.

“You know what, I’ve never been hurt. I’ve never broken a bone, so I didn’t know what to be afraid of,” he said. “I think I went into the initial surgery a little bit naïve.”

It was difficult for him to stay away from the barn even though his father, Marc, himself a trainer, had come in to help and continues to work in his son’s behalf. “It’s a well-oiled machine, and it’s probably better when you’re not there,” said the self-effacing Sharp. “But especially at this time of year, we have 25 2-year-olds in the barn. It’s exciting, and you rest easier when you are there.”

The patient admits he may have done too much too soon.

“I don’t know what I did that was too strenuous,” he said. “I have a couple of ideas.”

He was admitted to a Louisville hospital on July 6 and remained there for five days as doctors evaluated the complication and attempted to repair the damage through a spinal procedure with the hope that nature would do the rest. Unfortunately, that did not happen, leading to the second brain surgery.

Sharp and Napravnik are heartened by the support they have received from family members, the racing community and owners who employ Sharp. Brad Grady, one of those owners, is sending his private plane to transport Sharp to Houston.

“It was really humbling to see how many people reached out and provided help to Rosie and I,” Sharp said.

Grady owned Girvin, the stable’s most accomplished horse. Girvin was one of the better members of the 3-year-old class in 2017, winning the Louisiana Derby (G2) and the Haskell Invitational (G1).

In an effort to aid his recovery, Sharp has not been saddling his horses before races. He has been staying away from the track in the afternoon as much as possible so he can make sure to be at the barn every morning.

“I feel that is where I am needed most,” he said.

Assistants Marvin Alvarez, Mike Mesceachera and Lorita Lindemann are stepping up whenever and wherever they are needed. Lindemann is overseeing eight horses at Saratoga Race Course. Sharp and Napravnik expressed their great appreciation for how understanding owners have been throughout the challenging process.

Napravnik believes the issue has taught both of them an invaluable lesson.

“It’s sent a message to both of us that we have to slow down,” she said. “Especially at the racetrack, that is so hard to do.”