Sharp Samurai runs up the rail to win the Rainbow 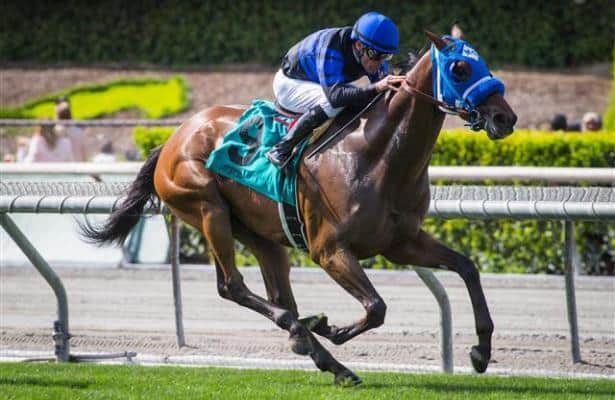 With a late surge at the rail under the master, Gary Stevens, Sharp Samurai easily overtook favored Conquest Farenheit to win Saturday’s $75,000 Rainbow Stakes at Santa Anita by 1 ¼ lengths.

An attentive fifth with three furlongs to run, Sharp Samurai was full of run while in the two-path turning for home when Stevens opted to dive to the rail, inside both pacesetter Monster Man and Conquest Farenheit.

“That was a Hall of Fame ride,” said Glatt. “Gary put up one helluva ride there, believe me. I thought he’d be up closer, but if we can get him back like that (off the pace), we’ll take it. This horse hasn’t done anything wrong since his first race. Last time (a fourth place finish in a one mile turf stakes here on May 6), he got into a bit of a pace duel…I think a mile and an eighth might be his best distance.”

Owned by Al and Sandee Kirkwood, he’s now unbeaten in two starts at a mile and one eighth on turf and he now has three wins from six overall starts. With the winner’s share of $46,980, Sharp Samurai, a Kentucky-bred gelding by First Samurai, boosted his earnings to $105,870.

“They didn’t expect him to be that far back but I got in the pocket and he was switched off,” said Stevens, a member of racing’s Hall of Fame since 1997. “He was very, very mature and I didn’t ask him for anything. I was pretty sure I had a lot of horse. When Santiago (Gonzalez, aboard Monster Man) drifted off the fence in the stretch, I asked my horse and I was right, he was loaded. It was a lot of fun.”

Ridden by Santiago Gonzalez, Monster Man was dispatched at 11-1 and paid $5.20 to show.

With nearly a million dollars on the line, Fly to Mars, a 3-year-old California-bred gelding owned by his breeder, Gary Barber, surged to the front turning for home in Saturday’s 11th and final race at Santa Anita, enabling one lucky ticket holder to take down the track’s massive Single Ticket Jackpot Pick Six pool of $891,568.

Purchased for $1,920 at the Hollywood Park Casino, the ticket was structured with the following number of horses used in each race, beginning with Saturday’s sixth: 3 x 4 x 4 x 5 x 2 x 2.

Ridden by apprentice Evin Roman and trained by Peter Miller, Fly to Mars, idle since his debut here on June 19, 2016, overhauled heavily favored Lucky With You inside the sixteenth pole to win by a half-length. Off at 4-1 in a field of 11 California-bred or sired maidens in for a $50,000 claiming tag, Fly to Mars paid $10.00 to win.