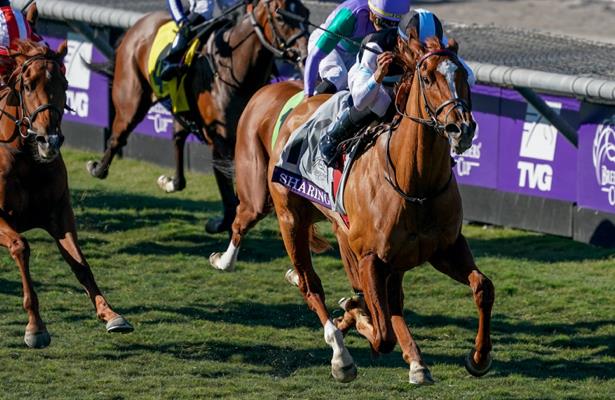 As Sharing returned to training in December, trainer Graham Motion made Tampa Bay Downs’ March 7 Florida Oaks (G3) a goal, then left open the possibility of a dirt start prepping for the Kentucky Oaks.

Without a work since Feb. 3, however, plans have changed for the Breeders’ Cup Juvenile Fillies Turf heroine.

“The schedule got too tight,” Motion said, with Sharing “more likely” to begin her season in at Keeneland, which hosts the Appalachian Stakes (G3) for 3-year-old fillies on April 5.

“I just was under pressure a little bit, and she had a little bit of soreness in her foot after the last breeze,” Motion added. “I don’t want to be rushing her to make this race. It’s a long year.”

Beyond the Appalachian, “all options are on the table” for the daughter of Speightstown, who’s campaigned by Eclipse Thoroughbred Partners and Gainesway Stable. Churchill Downs runs the Edgewood (G3) on Kentucky Derby weekend before the Hilltop two weeks later at Pimlico in Maryland, where Sharing was bred.

Motion also mentioned a trip to Royal Ascot for the Coronation Stakes is possible “depending on when we get a start” to the season. The Coronation runs on the fourth of the five-day meeting each June.

Sharing is both by a Breeders’ Cup winner and out of one, with her dam Shared Account, another Motion trainee who took the 2010 Filly & Mare Turf.

After finishing third on debut at Saratoga, Sharing rattled off three straight victories to end her 2-year-old season, progressing from maiden special weight company to a victory in Laurel Park’s Selima Stakes. She then stalked the pace en route to a 13.8-1 upset in the Breeders’ Cup Juvenile Fillies Turf.

Sharing is stabled at south Florida’s Palm Meadows Training Center, where her lone work this year measured a half mile in 48.70 seconds on turf.