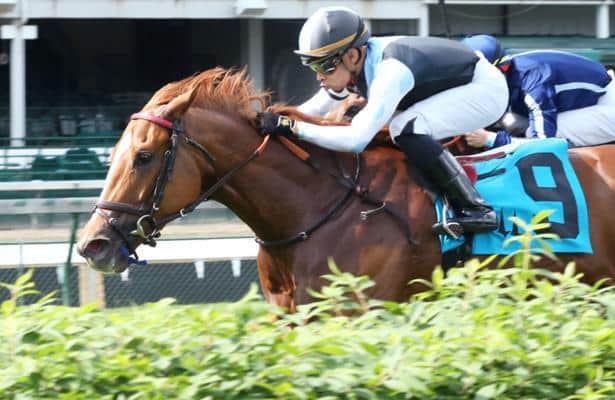 Breeders’ Cup Juvenile Fillies Turf heroine Sharing saw her schedule jumbled this spring with a number of return options, including Keeneland’s Spring Meet, called off due to the COVID-19 pandemic.

In that respect, trainer Graham Motion won an uphill battle having her ready to fire in a winning performance in Saturday’s $100,000 Tepin Stakes at Churchill Downs.

The daughter of Speightstown, out of Shared Account — both Breeders’ Cup winners in their own rights — came from just off the pace under jockey Manny Franco while holding off the late bid of rallying Grade 1 winner Abscond.

“It’s great seeing her back to her form from last year," Franco said. "She’s very classy, but it makes your job easier when you have nice horses underneath you.”

Churchill offered the inaugural Tepin on Saturday as part of its “Stephen Foster Preview Day” card, running as a prep for the Grade 3, $100,000 Regret Stakes on June 27. Thirteen 3-year-old fillies left the gates, with Sharing and Alms – who entered at 4-for-4 lifetime and as an 8-5 favorite – the two biggest names.

58-1 shot In Good Spirits broke to the lead and set fractions of :24.16 and :48.39. Outburst, Walk in Marrakesh and Sharing all pressed the leader, who hung tough before finally running out of gas in the stretch.

Sharing came three-wide with Outburst and In Good Spirits to her inside and put her nose in front at the eighth pole. Abscond and a hard charging Pass the Plate made late bids, but came home second and third, respectively, behind the Breeders’ Cup champion.

Alms had to duck all the way in from post No. 14 and later checked in the far turn before flattening in the stretch. She crossed fifth behind the top three and In Good Spirits.

Maryland-bred Sharing is campaigned by Eclipse Thoroughbred Partners and Gainesway Stable. She improved to 4-of-5 lifetime with the win, the last three of which have come in stakes flight.

Should connections keep Sharing under the Twin Spires, she’d be the one to beat next month in the Regret.

*Rating is based on HRN fan votes, which rank the Top Active Horses in training.
Sharing Tepin Stakes Tepin Stakes (2020)