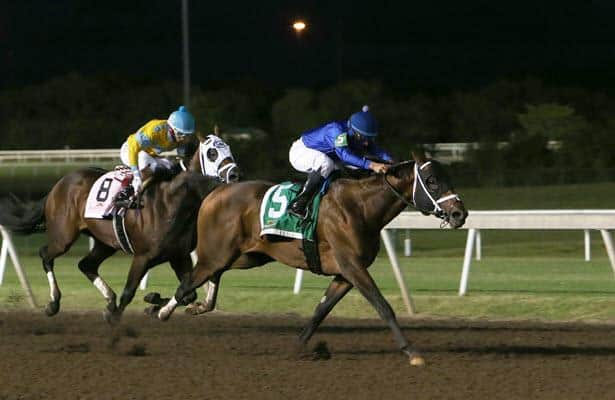 Into August, Godolphin’s racing operation and trainer Brad Cox had considered running Shared Sense in the Kentucky Derby. When they opted out, the Grade 3, $300,000 Oklahoma Derby was chosen as the next stop for him. On Sunday, he came through for those connections.

Godolphin’s top option for the Kentucky Derby for most of the year was a horse named Maxfield. When he left the Derby trail with an injury, Shared Sense became a possibility for the run for the roses the first Saturday of this month. He was a late bloomer, however, winning his first stakes race on July 8 when he took down the Grade 3, $300,000 Indiana Derby at Indiana Grand. While he earned 20 points to qualify for the Kentucky Derby field, he would have had to be supplemented for $45,000 if they wanted to take on Tiz the Law and Authentic. The connections opted to keep him on a different route and that’s when he came to Remington Park.

“We just didn’t feel like he had the turn of foot coming out of the gate that you need to be in position to run against horses like those in the Kentucky Derby,” said Blake Cox, who represented his dad, Brad Cox, at Remington Park. “We always thought he was a nice horse, but he still needed to learn some things.”

A perfect example of Shared Sense’s lack of a turn of foot came after he won the Indiana Derby and was entered back in the $200,000 Ellis Park Derby on Aug. 9. If a horse doesn’t have the temerity to get position out of the gate as Cox mentioned, it can be an even tougher task to beat this class of horse from the outside 12-post position. That’s what he drew for the Ellis Park Derby and he left the starting gate dead last. He was behind the field down the backstretch of that race and did close, but could do no better than fifth.

That’s when Blake Cox said his father, Brad, talked to Godolphin and they opted out of Kentucky for Oklahoma to give him more experience.

Brad Cox is the second-leading trainer in the country, behind Remington Park leading trainer Steve Asmussen, with his horses earning more than $11 million this year. Cox became the first trainer to win the Oklahoma Derby in back-to-back years, having also scored the 2019 edition with Owendale.

The 3-year-old Kentucky-bred colt by Street Sense, out of the Bernardini mare Collective, was made the betting favorite at 9-5 odds, and pulled away deep in the stretch for a two-length victory over Mo Mosa (5-1) in second. Lightly raced Liam, making his first start against winners, and first stakes try, ran third at 26-1, another 2-1/2 lengths back.

A pair of horses with plenty of action on the toteboard that didn’t live up to the backing were Oklahoma-bred Rowdy Yates (5-1) in sixth and Dean Martini (4-1) in seventh. Rowdy Yates was trying to become only the third Oklahoma-bred to win this race but he didn’t have any rally into the stretch. Dean Martini pressed the pace into the stretch but backed up over the final furlong.

Jockey Richard Eramia took comfortable rein on Shared Sense down the backstretch of the 1-1/8th miles race on the main track, sitting fifth.

“I had a little hold on him and he was relaxed behind horses,” said Eramia. “I knew I had a lot of horse left and the best horse in the race.”

Eramia and Shared Sense put a head in front at the top of the lane before drawing off from their competition.

Shared Sense earned $120,000 for the win, his fourth from 10 starts to go along with two seconds while boosting his overall bankroll to $447,745 lifetime. He was bred in Kentucky by the owner. Shared Sense was not the top money earner in this nine-horse field, going in, but he was coming out, proving he is learning his craft.

Remington Park racing continues into a new month with a Thursday-Saturday schedule on Oct 1-3. The first race nightly is at 7:07pm-Central.