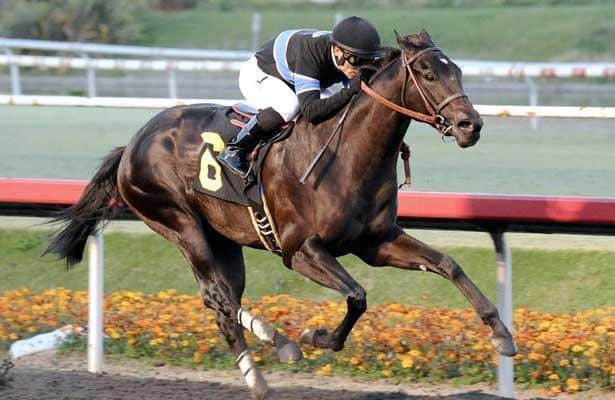 After winning his first two starts around one turn by a combined 14 ¾ lengths, Shared Belief was again dominant as he stretched out and stepped into Grade I company for Hall of Fame trainer Jerry Hollendorfer in the $751,500 CashCall Futurity Saturday at Betfair Hollywood Park.

Ridden with confidence by jockey Corey Nakatani, Shared Belief, a gelded son of Candy Ride and the Storm Cat mare Common Hope, definitely stamped himself a 3-year-old to watch in 2014 the way he concluded his 2-year-old season.

After tracking the early pace set by 131-1 shot Brother Soldier, Nakatani was content to wait when 26-1 shot – and eventual runner-up - Candy Boy made a bold move outside to gain the lead entering the far turn.

When he asked Shared Belief turning into the stretch, Nakatani got the same kind of acceleration the Kentucky-bred had shown when winning the Grade III Hollywood Prevue by 7 ¾ lengths in his Southern California debut – and first start for Hollendorfer – Nov. 10.

At the finish, Shared Belief, who is owned by a partnership that includes his trainer, television and radio personality Jim Rome’ Jungle Racing LLC, KMN Racing LLC, Jason Litt, Alex Solis II and George Todaro, had 5 ¾ lengths on Candy Boy.

Privately purchased by his current connections after winning by seven lengths against maidens Oct. 19 at Golden Gate Fields, Shared Belief completed the 1 1/16 miles over Cushion Track in 1:42.16. The clocking was the fastest in the CashCall Futurity since Pioneerof the Nile went 1:41.95 in 2008.

“Wow!’’ said Nakatani, who also won the 2010 CashCall with Comma to the Top. “My horse has a pretty high crusing speed and when (Candy Boy) made that early move, I couldn’t go at that time.

“I’m just very thankful to Jerry Hollendorfer and his team, (assistant trainer) Dan Ward, and, obviously, (Solis II) for finding this horse and buying him. He did all the work and I was just a quiet passenger on him. Wow!’’

“I said after Mizdirection won her first Breeders’ Cup (Turf Sprint), no matter what happened after that, I was fine,’’ he said. “The second one was amazing and today was obviously a really incredible day.’’

Three weeks removed from an easy win against maidens at the CashCall distance, Candy Boy finished 1 ¼ lengths ahead of 8-1 shot Tamarando, the Grade I Del Mar Futurity winner also trained by Hollendorfer. Candy Boy paid $15 and $8.40. The show price on Tamarando was $3.20.

There was a stewards’ inquiry into the Futurity due to an incident on the backstretch where Kobe’s Back, who wound up 10th, stumbled after clipping heels. There was no change in the order of finish as the stewards ruled the gray son of Flatter caused his own trouble.

Bond Holder, fourth in last month’s Breeders’ Cup Juvenile, was fourth again Saturday and he was followed by Electric Eddie, Brother Soldier, Sheikinator, Rankhasprivileges, Even Echo, Kobe’s Back, Tap It Rich, the 5-2 second choice, and Karma King, who was eased in the stretch.

Analysis: Use these 3 runners in the Cigar Mile
After taking more time to handicap the Grade 1, $7...
x close