Share the Ride prevails in Fall Highweight at Aqueduct 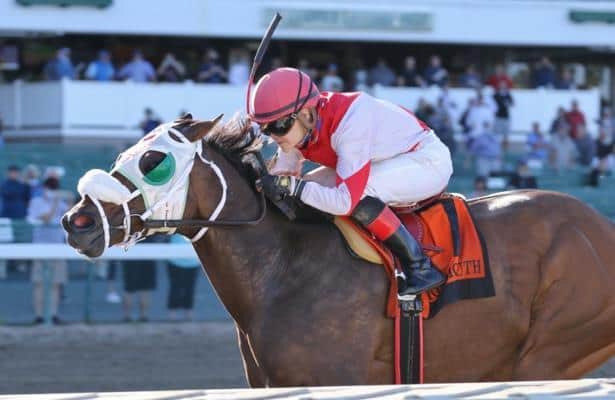 Photo: Equi-Photo
A quick turnaround was no issue for Share the Ride, who outdueled Tribecca down the lane before kicking clear to a three-quarter length win in Sunday’s $100,000 Fall Highweight Handicap (G3) going six furlongs at Aqueduct Racetrack.

Trained by Antonio Arriaga for owner Silvino Ramirez, the son of Candy Ride ran just 11 days ago, where he bested six others in a seven-furlong allowance at Parx by 7 ½ lengths, garnering a 101 Beyer Speed Figure.

Breaking from post 5 in the seven-horse field, jockey Jose Ortiz hustled Share the Ride through the first few strides out of the gate and secured his mount a path to the outside as Tribecca dictated terms on the front end through an opening quarter-mile in 23.03 seconds over the fast main track.

Around the far turn, Share the Ride inched his way closer to Tribecca under no urging from Ortiz, who looked over both shoulders as they approached the quarter-pole through a half in 46.14.

Ortiz gave Share the Ride his cue just outside the three-sixteenths pole, but a stubborn Tribecca did not retreat and dug in toward the rail as multiple stakes-winner Stan the Man and five-time winner Absentee made late bids in tandem to the outside.

Share the Ride edged clear of Tribecca just inside the eighth-pole to hit the wire a three-quarter length winner in a final time of 1:10.62.

Late closers Stan the Man and Absentee finished a respective second and third. Tribecca, Drafted, Arch Cat and Majestic Dunhill, who was compromised by an unfavorable beak, rounded out the order of finish.

Share the Ride has been a model of consistency through his 5-year-old campaign, winning 4-of-9 starts, including a triumph in the Mr. Prospector on September 12 at Monmouth Park. He also was third to Firenze Fire in the Grade 2 Vosburgh on September 26 at Belmont Park and was a game runner-up to Majestic Dunhill in the Grade 3 Bold Ruler on October 31 at Belmont.

“Everybody had a little extra weight today, but my horse was very game,” Ortiz said. “It was a great training job. This horse was 100 percent ready. He broke well and sat second and relaxed. I asked him to go passing the three-eighths pole to engage Tribecca. I wanted to be close to him at the quarter-pole because he's hard to beat on the lead and he digs in. I was in good range to win the race and they battled down the lane; two good horses in a match race and then the other horses were coming too, at the end, but he dug in.”

Bred in Kentucky by Dixiana Farms, Share the Ride is the second progeny out of the multiple stakes-winning and Grade 1-placed Graeme Hall mare Belle of the Hall.