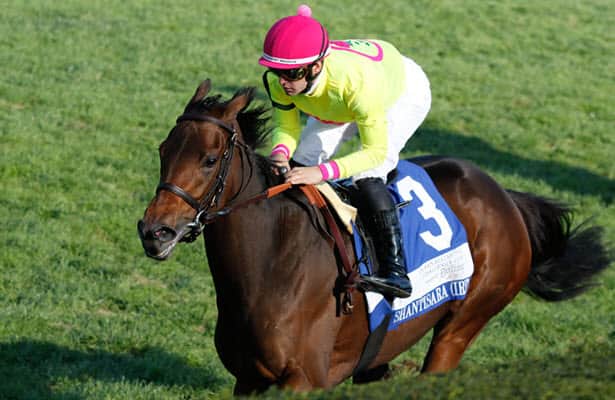 For Shantisara, the win was her third-straight stakes victory having previously won the Jockey Club Oaks Invitational at Belmont Park on Sept. 18 and the Pucker Up (G3) at Arlington Park in August.

The Irish-bred Coulsty filly raced five times in France before coming stateside earlier this year. In her U.S. debut, she was second in the Boiling Springs at Monmouth Park in June.

“She’s really tactical,” winning jockey Flavien Prat said. “She always puts you in a good spot. She was traveling really well today. Obviously the soft ground was a question mark but she felt like she was doing good on it. When it was time to go she really showed a good turn of foot.”

Shantisara blew past her stablemate at the three sixteenths pole and powered through the stretch to win by five lengths. Her winning time in the 1 1/8-mile event over yielding turf, was 1:48.86.

“I was happy where I was,” Prat said. “Thought I had a good horse who could go a long way and it was just a matter of seeing if she would like the ground.”

The filly is owned by Michael Dubb, Madaket Stables and Robert LaPenta.

The win was Brown’s second graded stakes win on Saturday. He also won the Sands Point (G2) at Belmont Park.

Burning Ambition finished third for trainer Brad Cox with European invader Nicest completing the superfecta. Empress Josephine, wheeled back seven days after running third against older in the one-mile First Lady (G1), went off the 2-1 favorite and finished last in a field of nine.

Shantisara returned $7.00 for the win.

What an impressive victory by #3 Shantisara (Ire) in the G1QE II Challenge Cup presented by Dixiana @KeenelandRacing!