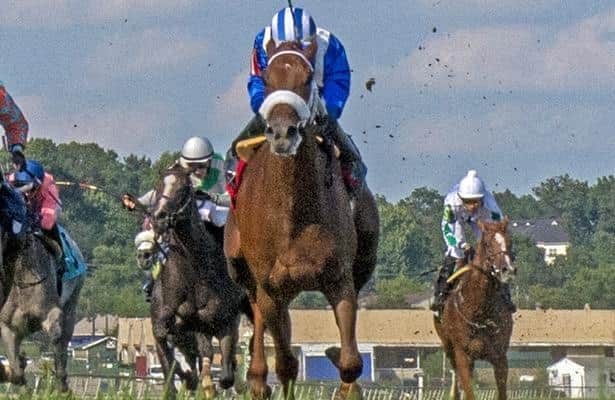 Twice in a row, trainer Michael Pino had watched his 3-year-old filly Karama sail to the lead in turf route stakes at Monmouth Park only to see her give way in the end.

On Sunday, Pino cut the Shadwell Stable homebred daughter of Kitten’s Joy back to 5 ½ furlongs and found himself a turf sprinter.

The race was the marquee event among five stakes races worth a total of $400,000 on Laurel’s Summer Sunday Stakes program.

Change of Control, who never threatened finishing second, was a nose in front of beaten favorite Introduced, who was third.

Pino, who was based in Maryland for 16 years before moving his operation to Delaware Park, said Karama has always showed ability.

After breaking her maiden in February at first asking at Gulfstream Park on the dirt, she finished second in the Game Face at the South Florida track in April.

The trainer put her on the grass and stretched her out to two turns in the Boiling Springs at Monmouth Park in May, a race in which she was beaten just a half-length, and then tried again last month in the Open Mind Stakes, also at a mile and 1/16.

In that race, she was in front by two lengths after six furlongs but faded to seventh and was beaten 5 ¾ lengths.

“She’s always showed ability,” Pino said. “I was very disappointed with her last race, but she checked out good and I figured she might want one turn. A lot of horses will go first time long and the second time will tell the tale. She just wants one turn.”

Pino said he’s been training for Shadwell for the past 18 years. He said they originally hired him because they were looking for a claiming trainer at Delaware Park, but sometimes they send him a horse that turns out to be a good one.

Karama was one of those.

“She’s got some offset knees that were pretty crooked,” said Pino, who decided to make Karama a late supplemental entry to the Stormy Blues. “But she is pretty quick. We had the 1 hole, so we had to get out of there. We didn’t want to get shuffled back, and we knew she had stamina.”