Shades of Justify as Charlatan resurfaces at Santa Anita 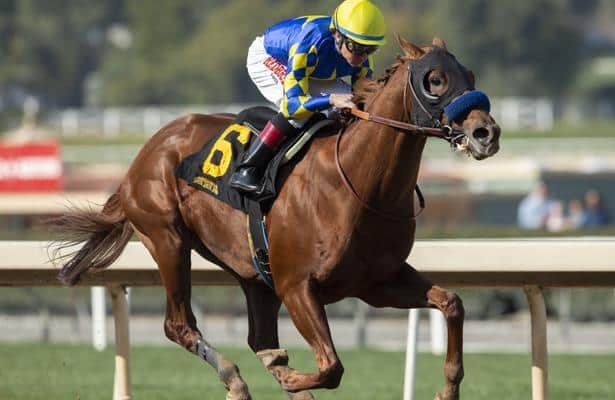 The comparisons to Triple Crown winner Justify will follow Charlatan into the spring.

Debuting the Sunday after Valentine’s Day, Charlatan earned a 105 Beyer Speed Figure for the effort and graduated to leading a one-mile allowance event Saturday at Santa Anita Park.

Back in 2018, Justify was unveiled that same calendar Sunday with a 104 Beyer effort. He won his one-mile allowance encore, then jumped straight into the Santa Anita Derby (G1) and 3-year-old classics.

Given Charlatan is a $700,000 yearling purchase trained by Bob Baffert, expectations of a foray on the 2020 Kentucky Derby trail are assumed should he perform to expectations Saturday.

Off as the second choice back on Feb. 16, Charlatan went out to set the pace, never giving his rivals a chance. After opening up in 21.89 and 44.72, the colt stopped the clock in 1:08.85 for six furlongs under what the official chart deemed “a long hold” by jockey Drayden Van Dyke.

“I thought he still might need one,” Baffert said, then that there's room for improvement. "He still looks a little soft, and until they run, you don’t know. But he was pretty impressive.”

Partners including SF Racing, Starlight Racing and Madaket Stables campaign Charlatan, a son of champion Speightstown who could end up with distance limitations. But the bottom side of his pedigree offers hope of stretching out given his dam Authenticity, a daughter of Quiet American who won graded races around two turns.

Van Dyke has the return assignment aboard Charlatan, who drew the outside post in a field of six.

Charlatan’s chief rival appears to be Great Power. The Simon Callaghan trainee also won impressively on debut, but that was back on Sept. 29. He hasn’t been since in the afternoons since and could also propel himself into the Derby prep conversation with a nice showing. Campaigned by JSM Equine, Lakland Farm and Qatar Racing, Great Power is a son of Blame.

Czechmight is the other colt in the field worth a mention. Going first time for trainer Richard Baltas, who trains for Calvin Nguyen, the son of Street Sense didn’t fire in the Feb. 15 El Camino Real Derby over Golden Gate Fields’ synthetic. Dating back to October, before he fetched $190,000 at auction, Czechmight won a Keeneland maiden race on the main track.