Serengeti Empress blazes to lead, digs in to win Ballerina 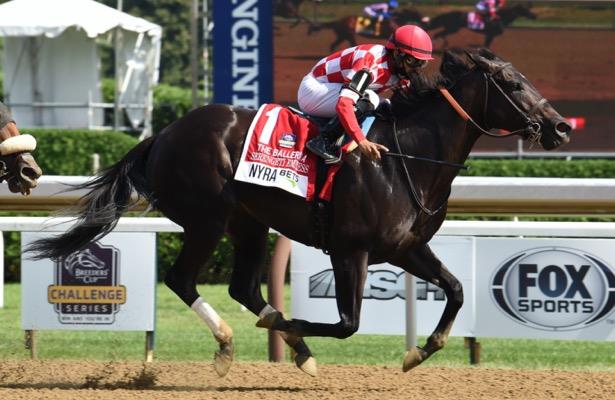 Trainer Tom Amoss has emphasized throughout Serengeti Empress’ career that the Alternation filly needs the lead. After a slow start, the filly quickly made up ground and gained that lead over Letruska down the backstretch of the seven-furlong Ballerina.

Serengeti Empress sprinted through opening panels of :21.75 and :43.74 under jockey Luis Saez. By setting those snappy fractions after already having to make up for a slow start, conventional wisdom would’ve pegged the pace setter an easy target down the stretch.

But Serengeti Empress wasn’t giving in. She turned back challenger Letruska coming out of the turn, then came to the wire with Bellafina to her outside and Victim of Love on the rail.

Bellafina made her run, but couldn’t catch Serengeti Empress, who hung on to win by a length. She stopped the clock in 1:21.63 for a win that returned $8.30.

"When we came to the stretch, she was just waiting for the competition and when the horse came outside, she was fighting," Saez said of Serengeti Empress. "She was really running."

“I really thought that opening half-mile… was going to be her doing in,” Amoss told FOX’s Saratoga Live, a program for which he serves as an analyst.

“But I think we learned a lot today. I think what we learned is this is a really, really good middle-distance filly.”

Serengeti Empress is now a Grade 1 winner at both one and two turns, having also won the 2019 Kentucky Oaks for owner Joel Politi. The Kentucky-bred’s Ballerina victory clinched a berth in November’s Breeders’ Cup Filly and Mare Sprint at Keeneland.

"I couldn't be more proud of her," Amoss said. "She's a very special filly to the barn and to my family and to the Politis. We call her, 'The gift that keeps on giving,' and she gave today."

Bellafina ran second as the 5-2 favorite, with Victim of Love crossing third in the field of seven older fillies and mares.

"I had a perfect trip, no excuses," Bellafina jockey Jose Ortiz said. "The winner ran a huge race. We tried to keep up and I thought I had her at the top of the stretch, but she's a very nice filly."