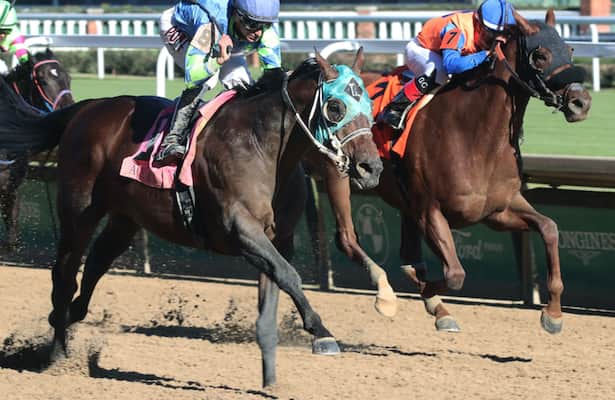 Señor Buscador relaxed off a sharp early pace, grabbed the lead at the top of the stretch and out-kicked Injunction late to win Saturday’s 30th renewal of the Grade 3, $300,000 Ack Ack at Churchill Downs by 1 1/4 lengths. Grade 1 winner Speaker’s Corner, the 7-5 favorite, finished seventh.

Señor Buscador, a 4-year-old son of Mineshaft owned by Joe Peacock Jr., ran one mile on a fast track in 1:34.60. The Ack Ack is a Breeders’ Cup “win and you’re in” event for the $1 million Breeders’ Cup Dirt Mile. By winning the race, Señor Buscador will receive an entry-fees paid berth to the Nov. 5 race at Keeneland along with a travel stipend.

Surly Furious went right to the front and led the field of eight older horses down the backstretch in the one-turn mile through fractions of :22.91 seconds, :45.74 and 1:10.08 with Speaker’s Corner chasing from the rail and Injunction to the leader’s outside. Señor Buscador was traveling comfortable mid-pack and in the clear on the outside.

Leaving the turn, Speaker’s Corner began to fade and Señor Buscador ranged up to Surly Furious’ right hip. He took command in upper stretch and edged away from Injunction nearing the wire.

“I was able to get him into a really good rhythm down the backside,” Arrieta said. “He was traveling in a good position behind the speed in front of us. In the stretch he showed a lot of fight to him. It’s really exciting to win a race like this and I’m so thankful for Joey (Peacock) and Todd (Fincher) for letting me ride him.”

Next up is the Breeders’ Cup Dirt Mile, according to Fincher.

“He showed his talent today,” Fincher said. “We knew he was a talented horse by the way he won the Springboard Mile in 2020 and he’s now maturing and I think is coming into his own.”

Surly Furious was fourth and was followed by Fulsome, Silver Prospector, Speaker’s Corner and Untreated. Mailman Money and Twilight Blue were scratched

Señor Buscador, out of the Desert God mare Rose’s Desert, was bred in Kentucky by Joe R. Peacock Sr. and his son, the owner.

The race is named in honor of Cain Hoy Stable’s 1971 Horse of the Year Ack Ack, who is enshrined in the National Museum of Racing and Hall of Fame. In his only Churchill Downs appearance, Ack Ack won the 1969 Derby Trial in 1:34.40, which was a track record for one mile that has since been eclipsed.