Why one new shooter skipped Ky. Derby to run in 2021 Preakness 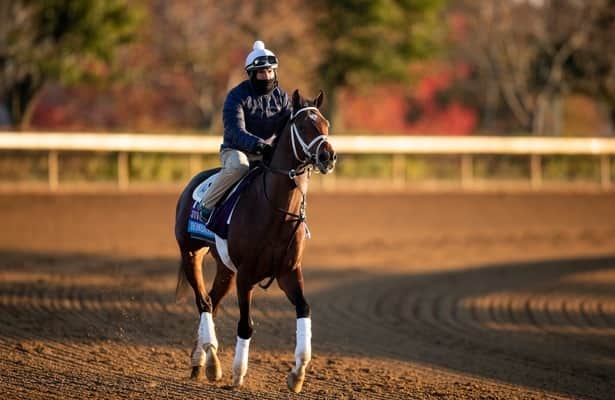 Who skips the Kentucky Derby to get to the Preakness? This year it is a horse that could become the wise-guy choice to spoil the Triple Crown.

“As you know these things can get a little expensive to run in,” trainer Mike McCarthy said. “And you know the Derby is a very taxing race on some young horses. We thought we would go into the second leg of the Triple Crown with some fresher legs.”

Enter Rombauer, who has shortened from 14-1 to best price of 9-1 in foreign futures betting for the May 15 running of the Preakness at Pimlico in Baltimore.

“It’ll be an interesting setup,” McCarthy told Horse Racing Nation and VSiN’s racing podcast. “I would have to think each jockey will ride their race that day. I thought in the Blue Grass we ran a little bit closer to the pace than I would have liked. We hit a bit of a flat spot around the turn. He ended up finishing well and galloping out well. I would prefer that if we were able to go ahead and make one solid run at them, let the horse settle himself, find his own spot and go from there.”

McCarthy will leave the dirty work to Flavien Prat, who is running away to this season’s riding title at Santa Anita. Taking the reins from Florent Géroux, Prat will be the sixth different jockey in Rombauer’s seven races.

“We’ve gone back and forth a few times,” McCarthy said from Southern California. “Flavien was here. He’d be able to work the horse over the weekend. I believe he worked him last year in the spring. The owners were very comfortable with having someone like him. The way Flavien is riding right now, it is certainly a plus.”

Owners John and Diane Fradkin spent $40,000 to breed their Cowboy Cal broodmare Cashmere to Twirling Candy at Lane’s End Farm in Kentucky. Rombauer was the result, and right away he was a 16-1 debut winner last summer going a mile on the Del Mar turf.

Then less than three weeks after a troubled sixth in the Del Mar Juvenile Turf, McCarthy moved Rombauer to a dirt debut in a Grade 1 stakes last fall at Santa Anita.

“The American Pharoah looked like it was coming up light,” he said. “He was a very, very good second that day to Get Her Number. If some things would have been a little bit different, maybe we would have gotten our nose down in front that day.”

The education of Rombauer took a big step forward despite a fifth-place finish at Keeneland last fall with Javier Castellano riding him in the Breeders’ Cup Juvenile. McCarthy summed up the experience by saying, “Short stretch there and stuck way back. Had to go around and outside some horses and took a ton of dirt.”

After a three-month break, Rombauer began his 3-year-old season with the race that provided him a springboard to the Preakness. Graduating to the synthetic track at Golden Gate Fields and with Kyle Frey riding, he closed from 11 lengths back on a tepid early pace to win by a neck in the El Camino Real Derby.

“He did it with aplomb that day to get his nose down at the wire,” McCarthy said. “He was a little bit farther back than we’d like, but we got the ‘W.’”

Since Golden Gate Fields and Pimlico are co-owned by The Stronach Group, the El Camino Real Derby was an automatic qualifier for the Preakness. Although there would be what McCarthy called a “last-minute decision” to go to the Blue Grass Stakes in between, the Fradkins were always keen to accept the free entry at Pimlico.

“It made a little bit more sense to wait until the Preakness and see how some of these horses came out of the Derby,” said McCarthy, who makes his Triple Crown debut next week.

Rombauer will be coming off a six-week break in his bid to be the sixth new shooter to win the Preakness since 1984. If he does, it will validate the thinking of the Fradkins and McCarthy to skip America’s biggest race, which 10 other sets of connections also did with their healthy horses.

“If you've got a lightly seasoned horse that’s got his whole career ahead of him, sometimes the Derby is not the right route,” McCarthy said. “After watching the way the race shaped, I’m glad we’re aiming toward the Preakness.”